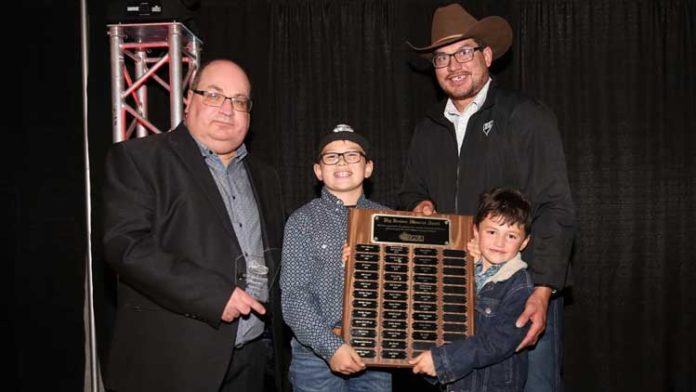 That was the date for the annual CPCA Awards Banquet – held this year at the WLS Convention Centre at the Lloydminster Exhibition Grounds – an event that brought together the top stars of the CPCA, as well as their families, friends and supporters to celebrate one more moment in the spotlight.

Among those in attendance was CPCA driver and Meadow Lake area resident DJ King who was recognized this year with the Roy Bremner Memorial Award, an honour presented to the individual who performs outstanding work in promoting and expanding the CPCA race season.

“Any time you are acknowledged with an award, it’s very honouring – especially when it’s an award like this one,” King remarked. “It shows you have a lot of respect from your peers and the guys you race with. They recognized me for the things I do to promote the growth of the CPCA, so it’s very nice to be honoured in this way.”

As the award suggests, King is highly regarded for his efforts to promote not only the association, but the sport of chuckwagon racing as a whole.

“The main reason is to just help keep the sport going,” King added. “I’m invested in the sport I love, and I love working with these beautiful animals. Working with the horses is something I truly enjoy, and it’s not just me. There are so many people who enjoy working with these animals and who love competing. If we don’t try our best to continue growing the sport, who knows? The sport may not be there one day. I want my family to grow up around this sport and I want to give them the chance to become involved if that is something they want to do. I don’t want them to not have the opportunity we have right now.”

Meanwhile, the High Points Driver’s Outriders Award was presented to Tyler McKenzie and Kale Lajeunesse with Jamie Laboucane receiving the Kyle McLaughlan Memorial Award for being the 2022 CPCA High Point Driver. The Randy Evans Memorial Award for the 2022 CPCA High Point Outrider was presented to Logan Pethick, while Kale Lajeunesse claimed the Chester Gorst Memorial Award for Most Improved Outrider.
This year’s CPCA Rookie Outrider of the Year is Ryan Martin while Meadow Lake’s Logan Gorst received the Safe Driver Award. Preston Faithful is the year’s Most Improved Driver, while the Stollery Children’s Hospital and the Jim Pattison Children’s Hospital benefitted from the fundraising efforts of the Women of the Wagons group.

The 2022 Rookie Driver Award was presented to Leslie Memnook with the Bruce Bremner Award – presented to the most consistent barreling outfit that held or took the rail without any driver penalties – went to Colby Stanley. The Wainwright Stampede Committee won the Show Committee of the Year Award, while the CPCA Youth Achievement Award – awarded to youth under the age of 14 in recognition of the important part they play in the sport of chuckwagon racing – was presented to Danika Gorst and Kage Miazga.

Kurt Price was named the CPCA’s Media Person of the Year, Tammay Flanagan and Sonny Poitras were given Gold Card Lifetime Memberships, the Loranger Award – presented to the member of the race personnel team who is the most honest, fair, supportive and helpful to the drivers of the CPCA – went to announcer Jason Lee, and the Kevan Mayan Sr. Memorial Award for Family of the Year went to Dallas and Lexi Dyck, and family.

“The banquet pretty much marked the official closure of the 2022 season and now we start the move toward 2023,” King said. “It was a great year, but 2023 will be here sooner than we think. Winter is almost here and the next thing you know we’ll be spring training.”