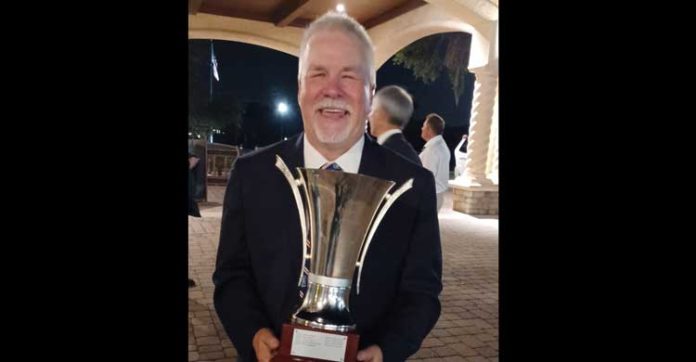 Meadow Lake’s Gerry Nelson, along with his coach Chris Villeneuve, continues to prove why he is considered among the best in the sport of blind golf.

Nelson and Villeneuve recently returned from Ponte Vedra Beach, Florida where, as members of Team North America, they helped their peers lay claim to the 2022 Vision Cup. It’s the first time North America has won the tournament after five attempts in the past 10 years.

“This event is the blind golf version of the Ryder Cup – It’s North America, which includes Canada and the U.S. against the rest of the world,” Nelson told Northern Pride. “As for the rest of the world, in this particular case, that included England, Scotland, Ireland, Israel, Australia and Austria. In the past, there have been other countries, but it depends on which players qualify.”

The matches were contested at the Tournament Players Club at Sawgrass, a famed course renowned for its par-three island hole.

“In blind golf, the Vision Cup is the biggest international event we have, right up there alongside the World Blind Golf Championships,” Nelson reiterated. “For anybody eligible to make the team and able to be there, it was huge.”

The tournament itself took place Sept. 19-22 and included a clinic day, as well as two days of two-person team play and one day of singles.

“The format saw 14 players per side – 12 men and two women making up the various sight categories of B1, B2 and B3,” Nelson explained. “The first two days are a modified Pinehurst system where we both hit the ball – I would hit my partner’s drive and he or she would hit mine, we would pick the best ball and play alternate shots until we hole out. The last day was straight singles matches. I had a winning record… this time I was paired with Mario Tobia of New Jersey in my first match, and we lost two down. Then, I was paired with fellow Canadian Julie Moroney from Victoria, B.C. We won our match two up and I beat an Australian, Glen Niciejewski, in four up on the final day. The whole experience was an absolute thrill.”

Nelson has qualified all five times North America has been represented at the Vision Cup, but only competed at the event four times. He did not take part the year the tournament took place in Italy.

“After several years of frustration and coming so close, it’s so rewarding and gratifying to be able to be part of the very first North American team to win the Vision Cup,” he said. “That is something I will be able to tell my grandchildren about. On a side note, my son, Wyatt, was there all week with me. He was out there cheering me on, and that meant the world to me to be able to have him there.”

During a scramble event also played at TPC Sawgrass, Team Nelson, which also included Wyatt Nelson, saw the younger of the two get closest to the pin on the aforementioned island hole.

“He stuck it to eight feet, beating out 144 other golfers including me,” Nelson said. “That was pretty cool.”

Going forward, Nelson said he and Villeneuve are looking forward to some down time before the competitive season begins anew next year.

“We may rest for a little while,” he noted. “We will hit balls all winter at Kingdom Golf in Meadow Lake, and, next season, we have the Western Canadian Championships in Warman in July and the Canadian Open in Nova Scotia in August. We are also looking at one of a few options in the U.S. next year such as the U.S. Open, but we are just waiting for a location to be determined. We’ll plan our schedule a little more in detail throughout the winter.”