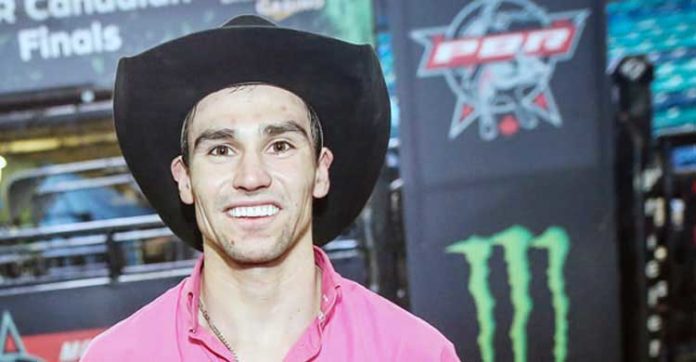 The three-peat wasn’t in the cards for Meadow Lake’s Cody Coverchuk, at least not this year.

Coverchuk, a two-time Professional Bull Riders (PBR) Canada National Finals champion was looking to win the title for a third time this past weekend, but – when the dust settled – things didn’t end up going as well as he expected.

“The finals were held at Rogers Place in Edmonton – home of the Edmonton Oilers – the best venue we get to ride in all year long, so it was very exciting,” Coverchuk told Northern Pride when describing the event. “I was ranked seventh coming into the finals and ended up sixth overall. Friday night (Nov. 11), in the first round, I bucked off a good bull and, in the second round, I rode a familiar bull named Spookie Lukie… I rode an 84 and was third in the round.”

Come Saturday (Nov. 12), in the third round, Coverchuk rode a bull named Up Shift and ended up earning 81 points before then climbing atop the reigning Canadian champion bucking bull, Happy Camper for the short round.

“Unfortunately, he hipped himself on the way out (of the chute),” Coverchuk said. “I got a re-ride on a bull named Uncle Cranky, and I fell off. It’s been a season full of ups and downs, peaks and valleys. I rode OK at the finals and, when I was bucked off, it was always from one of the best bulls at the event. Obviously I wanted to win, but, obviously, I understand I can’t always win. But, I sure would like to always win. That’s the mentality I go in with every time. It’s disappointing not to do that, but it makes me realize I need to work even harder during the off-season to be ready for next year.”

Nick Tetz of Calgary, meanwhile, delivered a come-from-behind push at the finals to be crowned the 2022 PBR Canada Champion. Tetz began the fourth PBR Canada National Finals of his career ranked second in the nation, 21 points behind then top rider Dakota Buttar of Eatonia, SK.

As for Coverchuk, he came into the finals with momentum having been the only rider to get scores on all four bulls he rode at the Touring Pro Division’s Mazergroup PBR held in Yorkton the weekend before.

In the first round, Coverchuk rode the bull Pure Feeling for for 84.5 points. He then sat tall atop Stutter Step in the second round for 84 points. The following night, his success continued with the bulls Farva in round three and Patches O’Houlihan in the fourth.

“Yorkton was really good for me – I rode four for four and took the win,” Coverchuk noted. “I did have the momentum from Yorkton coming into the finals, but it’s just the nature of the sport. It’s not like we’re just getting on easy bulls at the PBR Finals. Those are the best 60 bulls in Canada, and Canada has some of the best bucking bulls in the world. Every bull you get on in the finals is definitely going to be tough and you need to be your best each and every time. It just didn’t work out in my favour this time, but that’s the way she goes.”

As he alluded to, however, Coverchuk does plan to be back next year.

“I feel the best I’ve ever felt,” he said. “Physically, I’m not sore and I have a lot of drive moving forward. I’m ready to win another Canadian championship and hopefully also contend for a world championship if everything goes my way.”