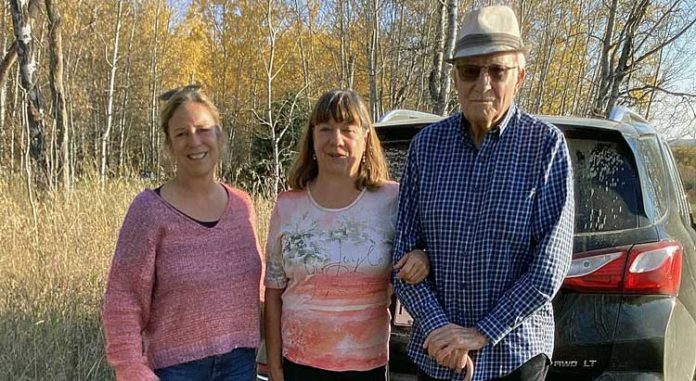 When fellow Meadow Lake and District Museum volunteer Millie Henderson forwarded me a message from Sylvaine de Tourdonnet of Spain saying she wanted to come to Meadow Lake to visit the place where her grandparents had lived, where her father was born and to see where he was raised, I was rather excited. I started to search for any information I could find. Their story was in the book Heritage Memories, written by her Aunt Colette, a sister of her father, so I started there.

With that information, I looked for them in the available censuses. The year 1921 was not available at a quick look, so I tried the 1926 Saskatchewan census where I found them at what I read as ‘South Section 23, Township 61, Range 16, Third Meridian’. To me that meant they lived on what we now call the Mill Road. However, an RM map we have at the museum (date unknown) has a Georges de Tourdonnet just west of Meadow Lake. I was confused about this as, the 1926 census listed the name of a Rene de Tourdonnet. When Sylvaine, her cousin (whose name is Renée) and her Uncle Michael arrived, they confirmed this was the same person. The uncle, the last surviving member of the siblings, wanted to see the area his brother had lived in as well. He is 96 years old and was one of the children who did not eventually go back to their native France with the rest of his family.

We tried to find the homestead at Meadow Lake, but didn’t have much success. We went not the yard to see if anyone there knew anything about the family.

We were invited in by Elizabeth McCrimmon who, although she couldn’t help us, served us homemade apple juice and cookies. The de Tourdonnets were very impressed with the friendliness shown by everyone.
Rene, his wife, Marcienne, and most of their children returned to France in 1947. The family planned to return in 1939, but, because of the Second World War, their ship was cancelled so they purchased some land near Island Hill and ranched for another eight years. Marcienne had no family here and wanted to go home to France.

We went to see Island Hill Oct. 8, but did not know where to look for the location of the place where the family lived. We did find someone, though, who knew the family. On Oct. 9, we arranged to meet Gordon Alger in the hotel breakfast room. Being the storyteller he is, we enjoyed listening to him immensely. He gave us directions to where he believed the family lived, and where the children went to school – Fraser Valley School.

Michael and his daughter had to leave so they could be closer to the plane they needed to catch for their trip home, but Sylvaine and I went back to Island Hill to see if we could find any of these places. We found the schoolyard. The old log building had burned, but the lumber school was still there and being used as a storage shed by the family that lives in the old teacherage that had been built onto to accommodate the family (Billy and Margaret Morin). Billy’s dad was the one who sold the de Tourdonnets land for the ranch. When they went back to France, they sold the land back to him. I believe I have remembered that correctly.

When we stopped at the former schoolyard and realized someone lived there, we decided to ask them if this was indeed the schoolyard even though there were several vehicles there.They had just finished Thanksgiving dinner, but invited us in for tea. We had to decline the offer because Sylvaine wanted to get back so she could get to Saskatoon to catch her flight the next morning. She did take many photographs and we had a great visit with Billy’s daughter and her husband who showed us the inside of the school.

I had a great time. Millie was sick with a bad cold, so excused herself from the car trips. She didn’t want to infect our visitors with her cold.