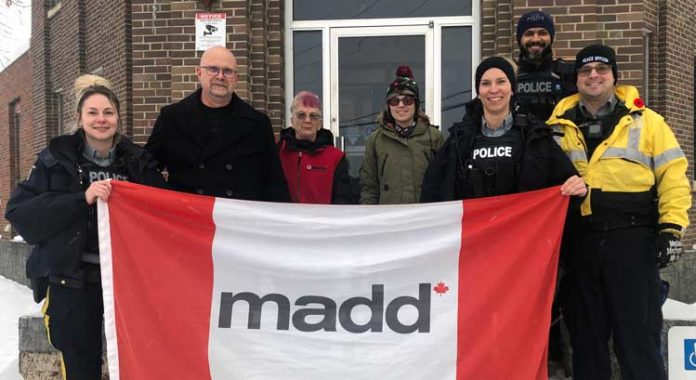 The Meadow Lake chapter of Mothers Against Drunk Driving (MADD) wants everyone to arrive alive this holiday season.

While Nov. 1 was the official start of MADD’s annual Red Ribbon Campaign, the Meadow Lake group didn’t put the spotlight on its efforts until this past Monday (Nov. 21) when the MADD flag was raised outside city hall. The campaign will continue until Jan. 3.

“The Red Ribbon Campaign is an awareness campaign designed to make people stop and think about not getting behind the wheel when they’re impaired by alcohol or drugs,” explained MADD president Stephen Pollock. “The official start of the campaign is Nov. 1, but, because of Remembrance Day, we stay quiet because we don’t want to do anything to draw attention away from the veterans. They’ve earned that respect.”

Pollock went on to speak about the importance of making safe choices.

“MADD doesn’t worry about people who drink or who partake in the use of marijuana – those are completely legal for adults to consume,” he said. “We just don’t want them to do these things and then get behind the wheel.”
The flag-raising ceremony at city hall has been held for close to a decade now, something Pollock said the local MADD chapter is very pleased to partner with the city on.

“Having the flag up there is a visual reminder,” Pollock said. “Because city hall is a little bit off the beaten path, it may not be something they see every day, but they do see it. It’s a reminder MADD is still out there and we are still concerned for people’s well being. The City of Meadow Lake has always been right there for us. They’ve always been very cooperative.”

In addition to flying the flag, MADD said the Red Ribbon Campaign will also include increased spot checks.

“The RCMP is very aware this is the season when most people are out with their friends and may not make the best of choices,” Pollock noted. “The RCMP will be more visible and spot checks will be more common.”

MADD members will also be on hand to assist the RCMP with these spot checks, and, with the permission of motorists, will tie a red ribbon to the vehicles as they stop as a way of getting their message across even further.

“It’s all in an effort to keep the roads safe,” he said.

“There’s an old saying – any man can stand up to his enemies, but it takes true courage to stand up to your friends,” Pollock said. “For someone to sit across from you at a table, look at you and say you can’t drive, you’re impaired, that takes a lot of courage. That’s what this campaign is all about – getting people to look out for each other.”

In Canada, at least 2,200 people die each year in car crashes, 55 per cent of those due to impaired driving.

“Right now, it’s almost a dead heat between impaired driving and distracted driving,” he said. “Those are killing about the same number of people every year, at least from the latest statistics I’ve seen. They call it impaired for a reason, so make your plans ahead of time… Call a friend, call a cab, stay where you are. The roads are dangerous under good conditions, but if your reactions are impaired, it’s just that much more deadly.”