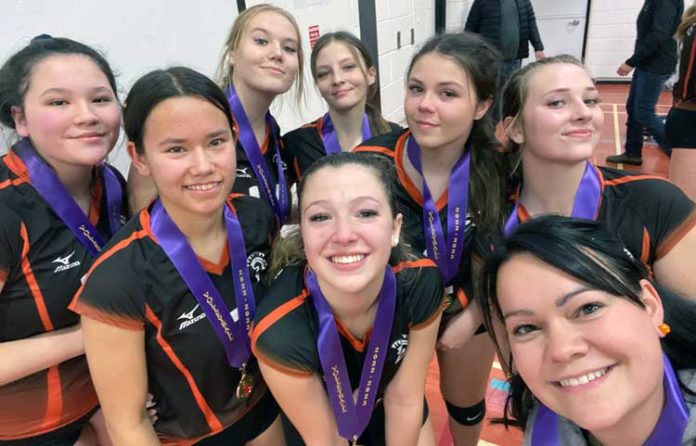 Another championship has come home to Meadow Lake.

The Carpenter High School boys ‘A’ volleyball team captured gold in the Saskatchewan High Schools Athletic Association (SHSAA) 4A regional playdowns held this past weekend in North Battleford. According to head coach Cheyne Dallyn, the win provides just the right amount of momentum for the team as it prepares to host SHSAA 4A provincials this Friday and Saturday (Nov. 25 and 26).

“We pulled off a win at regionals, which is great,” Dallyn said. “It was a six-team tournament that saw us play our two round-robin games against Onion Lake and La Loche. We won both of those games which led to a cross-over game against the second-place team in the other pool, which was Marion Graham Collegiate from Saskatoon.”
CHS defeated Marion Graham in two sets, which moved them into the gold-medal game against John Paul II Collegiate from North Battleford. Meadow Lake again came out on top in two sets to earn the regional championship.

“Things are building to provincials, and going into provincials on a high note is very good,” Dallyn said. “The most important thing is the boys are working hard and they’re seeing a lot of that hard work pay off.”

CHS’ first game at provincials is scheduled for Friday at 12 noon against Melville. They will also play at 2 p.m. against Martensville and 5 p.m. against La Loche. Saturday, the Spartans are scheduled to meet Melfort at 10 a.m. (that game takes place at Jonas Samson Middle School) with playoff games to follow.

“From a competitive standpoint, this weekend will be all about us managing our emotions,” Dallyn said. “There’s going to be a lot of excitement building up to this, and a lot of excitement being in front of our fans, our school and having that hometown support, but now it will be managing our emotions to make sure we are focusing on what we need to get the job done. From a community perspective, we have a ton of people volunteering their time, a ton of people helping us out and we’re extremely grateful for that.”

Meanwhile, this past weekend also saw the CHS girls ‘A’ volleyball team in action when they won bronze at the SHSAA 4A provincial championships in Nipawin.

“The girls did it,” exclaimed head coach Desirée Klarner. “They battled hard and brought home the provincial bronze medal.”

The team got off to a rocky start, however, against Moose Jaw Central, losing its first match Friday (Nov. 18) in three sets.

“But, then it was go time,” Klarner said. “The girls were nervous, but after being handed their first loss there was no stopping them. They went on to win their next three matches in round-robin play. Their final match in the round-robin was against the hometown crowd in Nipawin.”

CHS dropped one set, but went on to beat them in three.

“This had them on fire headed into playoffs and put them first in their pool,” Klarner noted. “This set them up perfectly headed into the quarterfinals. Here they faced Martensville, which is a scrappy team that doesn’t let anything hit the floor. This was a do or die match. If they lost this, they’d go home. You could feel their tension and, with nerves running high, they lost the first set.”

Klarner went on to say the girls had to battle hard to get things together and bring it home, winning the next two sets and sending them to the semi-finals against John Paul II Collegiate.

“JPII had our number on this one and the girls battled some close matches, losing the first set by two points and losing the match to move into the bronze-medal game,” Klarner said. “Spirits were low, but they rallied, got their heads straight and once again got ready to play the hometown team. This felt like the gold-medal game having a huge crowd to play against and a team that lost to us the last two times we matched up. They were coming at us with vengeance, but they had nothing on us. The girls were unstoppable and, from the first point, you knew this game was theirs.”

“It was a beautiful thing to watch,” she said. “The girls dominated the game and there was nothing the other team could do to stop them. As a coach, I couldn’t be prouder of the girls. They worked hard all season and finished their provincial run with some well-deserved hardware.”

This year, CHS loses seven seniors, some of whom Klarner has been coaching since Grade 7.

“It is hard to imagine not having them next year and I am so happy for them they got to end their high school volleyball career with a win,” she said. “These girls are very dedicated to this sport and have put countless hours in to improve their skills and it all paid off in the end. I wish them nothing but the best moving forward.  I would also like to thank (fellow coaches) Lisa Timmer and Chris Perry for joining us late in the season for the provincial run. I appreciate their knowledge and the morale they brought to the team when it was needed the most.”