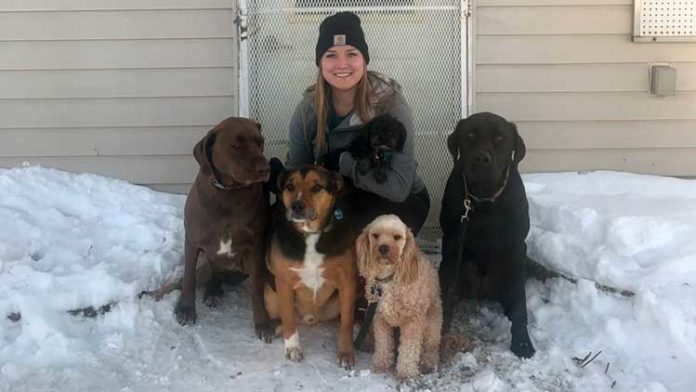 Meadow Lake’s Karlee Mazuren is hopeful the generosity of the community will once again be enough to bring her, and her canine companions, some warmth this holiday season.

Mazuren, a board member with the Meadow Lake and District Humane Society, will once again take part in an important fundraiser for the local shelter when, beginning tonight (Dec. 1), she will sleep in a dog kennel at the shelter itself until she receives her goal of $8,000 in donations.

“I’ll be staying at the shelter, excluding my work hours or when someone is there for a shift, sleeping on the floor in a dog kennel,” Mazuren explained. “The purpose is to raise money for the shelter, which is completely run by volunteers. We are donation-based, so all the money I earn will go toward medical bills and other needs for the animals.”

Mazuren went on to say, for the past two years or so, all shelters have been bursting at the seams.
“There are dogs and cats needing our attention and we just don’t have the funds or the space,” she said. “With this money I am hoping we can get our veterinary bills back on track, we can get our food back on track and give donations to other frontline rescues going out to communities.”

The local humane society also performs its own rescues in northern and remote communities, so Mazuren said funds could also be used toward the van used for these excursions.

“In the past, this money has even bought us a vehicle, which is amazing, and we actually want to, one day, purchase another one,” Mazuren said. “But, right now, vet expenses are the number one thing that needs to be addressed. It’s been a crazy year and any money we can get is definitely needed.”

This is the third year Mazuren has participated in the shelter sleepover.

Mazuren went on to express how hopeful she is for another short stay.

“To put it bluntly, sleeping in the shelter is awful,” she said. “I bring all six of my own dogs to stay with me, but I hardly sleep. I freeze. There is heat in the building, but there are drafts from the dog doors. Without a doubt, every year, the temperature outside drops to -30C and, sure enough, the forecast for Dec. 1 is a low of -30C throughout the night.”

She also said it’s very noisy at the shelter.

“The cats are the loudest – they do not sleep, they fight all night, they’re meowing, it’s so funny,” Mazuren said.

Cash or eTransfer donations can be made to Mazuren to help rescue her from her stay at the shelter. Tax receipts will be issued for donations of $20 or more.

“The support of this community is amazing,” Mazuren said. “I grew up watching former humane society president Jillian Doucet do this, and, even then, the community was so involved. Meadow Lake is so amazing with anything that happens – everyone donates, even my home reservation of Waterhen Lake First Nation donated $500 last year. The community support is incredible, not only in Meadow Lake, but in surrounding communities as well. It’s very humbling and it’s amazing.”

In addition to the sleepover, other fundraisers are planned at the shelter including pet photos with Santa this Saturday.

“All money that goes to that will be donated to my fundraiser,” Mazuren said. “I’m hoping to run another, smaller fundraiser the next week if I’m still there (sleeping at the shelter), but this will be a start.”