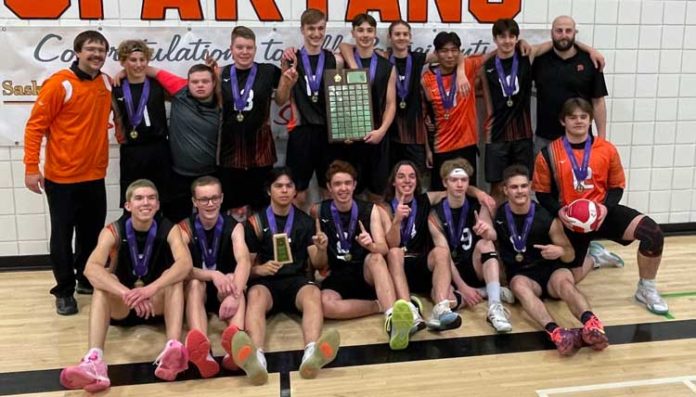 The Carpenter High School boys ‘A’ volleyball team promised it would deliver, and it did.

The team went undefeated this past weekend to win the Saskatchewan High Schools Athletic Association (SHSAA) 4A provincial volleyball championship at a tournament hosted by CHS right here in Meadow Lake. Ten teams, including Carpenter, were in attendance, but it was the Spartans who pulled out all the stops to ensure victory in front of a crowd of hometown supporters.

“We went into the weekend ranked number one,” remarked CHS coach Trent Marsh. “We knew we had a really good chance to win, but sometimes that adds even more pressure.”

In the team’s first game, played Friday (Nov. 25) at CHS, the Spartans squared off against Melville.

“They were a decent squad with big, physical athletes, but they ran into injury trouble throughout the weekend,” Marsh said. “That put them out of contention, but I feel they may have had an opportunity to be in the final or even win it all if they stayed healthy. We played them first, winning 25-13 and 25-22. In the first set, I believe Melville was a little nervous, but they got rolling in the second making it a much closer match.”

Next up, CHS faced the team from Martensville.

“Martensville has a developing program, which is awesome to see, but they’re quite inexperienced,” Marsh noted. “This caused them to make a few mistakes, losing a lot of points on errors which we were able to take advantage of.”

Saturday (Nov 26), CHS squared off against Melfort in its final round-robin game, which was played at Jonas Samson Middle School.

“Melfort is a big, physical team, so they gave us a lot of problems in terms of blocking, but, at the same time, I felt we were the quicker team and took advantage of their middles not being able to close some blocks,” Marsh continued. “We won 25-20 and 25-17, landing us first in our pool and moving us into the crossover.”

In the quarterfinals, CHS met Marion Graham Collegiate from Saskatoon.

CHS won 25-10 and 25-13, moving into the semi-final against Vanier Collegiate from Moose Jaw.

“In the first set, we won 25-20 while, in the second, we won 26-24,” Marsh said. “But, at times, we were down as much as seven points. It was one of those matches where we were a little nervous, especially when things weren’t going very well. We had to reset, refocus and keep working as hard as we could and, eventually, we scored a few key points that gave us a little bit of energy, enough to help us win.”

The final came down between CHS and John Paul II Collegiate from North Battleford.

“JPII played very well throughout the tournament and came out firing on all cylinders,” Marsh stated. “We struggled right out of the gate, but, again, it speaks to the character of our team to be able to whether the storm and keep going. Eventually, we got back into our rhythm, got our offence going and won 25-22 and 25-18.”

“It feels good to be able to go undefeated because, at provincials, anything can happen,” he said. “Especially when you’re ranked so high, the other teams are going to give you their best because they have nothing to lose.”

Marsh is also very pleased with the support the Spartans received from family, friends and everyone who helped make the tournament a success.

“We have to start off by acknowledging the staff at CHS,” he said. “There were so many amazing people who helped us out throughout the weekend. It’s hard to put on an event like this without their help organizing the volunteers, as well as running the booth. There were also some parents from the girls volleyball team who helped keep score and so on, while members of the girls team were also on hand to show their support and lend their help. The same goes for the folks at Jonas who ran the show over there… The community at large was also a big support. Everyone came out and cheered the team on.”

“Jackson gets a special shoutout because he gets the biggest cheers from the crowd, he gets everyone excited and fired up, and brings a lot of energy to the team,” Marsh said. “He gave us a huge boost energy-wise, and we were very happy to have him there.”