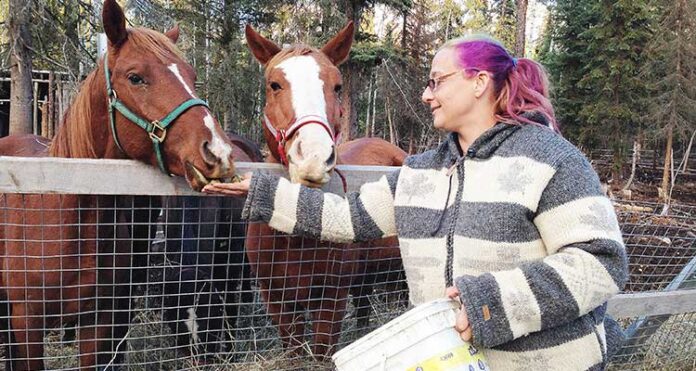 The boreal forest of northern Saskatchewan is not exactly known as horse country, yet Tina Johnson and her husband, Cliff, have established Alicorn Stables near Rabbit Creek about 20 kilometres south of Lac La Ronge.

Johnson says she was bitten by the horse bug when she was 11 years old, living in Dalmeny, SK.

“Every day, I would muck out barns after school, so I could ride,” she remarked.

Her teen years were spent in La Ronge where she had only occasional opportunities to ride when the family made trips south. So, when she left home at 20, she had no intention of coming back. However, several years ago, there was a turning point. At the time, she and Cliff owned 10 horses and were living in Spruce Home. Looking for a change of scenery, a family member offered them access to 22 acres of Crown land.

“I told Cliff I wouldn’t come back unless I could bring my horses,” she said.

They set up the business offering trail rides in 2012, deliberately keeping prices low, so they would be affordable for more families. While response from the community has been good, it barely pays for the feed, and feed is one of the challenges of their northern location. With no pasture, they need to feed the horses year-round. Every Sunday, they head south for a load of hay.

“Horsefly season up here is unreal. It’s bad for the people, but about 30 times worse for the horses,” Johnson observed.

While their original plan was only to offer trail rides, Lionel Brideson, former principal of Gordon Denny Community School in Air Ronge, approached Johnson last year about offering a six-week “empathy” program with 10 students. It was very successful and now Johnson is exploring options for becoming certified as an Equine Assisted Learning leader, and building a riding arena to facilitate the program.

Johnson loves sharing her horses and she loves seeing how children respond.

This past summer’s fire season triggered a chain reaction of generosity that Johnson won’t soon forget.

A Grade 1 class from Hall Lake had planned a year-end outing at Alicorn at the beginning of June, but then had to cancel because they were evacuated. When they were able to return to the community, they advised Johnson instead of rescheduling they would donate the money raised to a family who lost its home to the fire in nearby Sikachu Lake.

“It kind of touched my heart,” she said. “So, we let them have their class trip anyway, pro bono, and they had so much fun.”

Several weeks later, when they feared road access to the south and their source of feed would be cut off by the fires, the Johnsons ended up having to evacuate with their horses where they, in turn, were the recipients of donations.