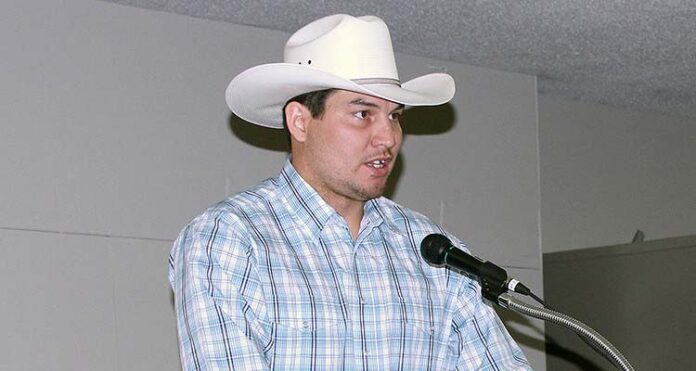 Held Oct. 24 in Lloydminster, the banquet recognizes the best drivers, outriders and equine of the year. Mitsuing from Loon Lake won this year’s High Point Driver title while King of Meadow Lake was honoured with the award for Rookie Driver. Meadow Lake’s Lajeunesse received the Most Improved Outrider Award.

“I had an excelled season,” remarked Mitsuing. “I won the horse trailer at Frog Lake, the dash in Onion Lake and the side-by-side at year-end.”

This season, Mitsuing had two of his sons, Darren and Dale, outriding for him. He said the team performed well and, with his sons at his side, Mitsuing was able to concentrate more on driving the horses. At season’s end, Mitsuing had accumulated 627.5 points and was closely trailed by Kris Molle with 627. Wayne Knight was crowned this year’s champion after he was awarded the title following the championship dash Aug. 16.

Mitsuing said it was a good way to end the year considering his prior announcement of retiring from the CPCA after next year’s Calgary Stampede. He said depending on what happens this spring and how much cash is raised through sponsorship, he might stick around a little longer.

“I’m young yet and I have so many fans telling me not to quit, but we’ll see what comes about this spring,” the 62-year-old Mitsuing noted.

Meanwhile, King – who placed 19th overall – was happy with his first season because he set some goals and was able to meet them. Logan Pethick and Lajeunesse were his outriders and, together with family and friends, he said everyone played a big role in assisting him.

“It’s a team,” King remarked. “It’s not just me. It’s not like you can come from one career and just jump in the box. There’s a lot of preparation people don’t see behind the scenes and it’s rewarding when you go the extra mile and it pays off.”

King went on to say his performance in the first three races of the year were “shaky”, but he later found consistency and was then placing in the mid-twenties or high teens. During his first year with the CPCA, King said he wanted to learn as much as he could and asked for advice from fellow drivers who were always willing to help.

“You can practice as much as you want at home, but when you come to the show it’s a whole different ball park,” he noted.