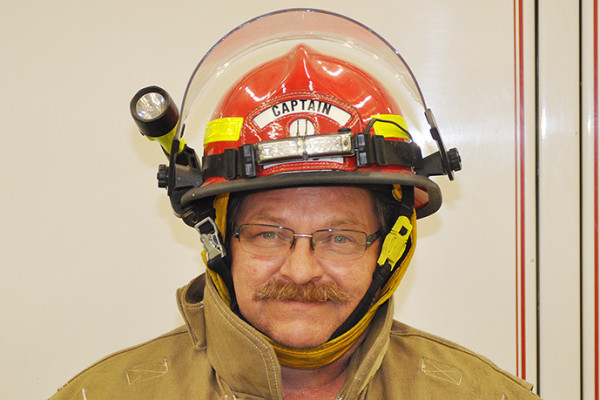 According to firefighter Kim Sawatzky, an ounce of prevention is worth a pound of cure. In celebration of Fire Prevention Week, Northern Pride recently sat down with Kim as he talked about important fire safety tips, his firefighting career and his love for Meadow Lake.

Q: When and why did you decide to become a firefighter?
A: It was in September of 1997. My neighbour and I, along with a few others, came down to the fire hall to check it out. We’d gone to school with Russel Nelson, who was the fire chief at the time. He had asked us if we were interested in joining. We were and, by the end of the night, we had our gear and our pagers.

Q: What is your current role?
A: I’m a captain of a fire crew, but we’re also slowly changing the way we do some things over here. Neil (fire chief Neil Marsh) has been so busy, I’m slowly taking over the maintenance end of things at the fire hall. If one of the trucks needs to be fixed, I’ll get a quote and look into getting the work done. Also, if we’re short supplies, I’ll place an order.

Q: How do the various types of calls you respond to differ?
A: Every call is different because there are always so many different factors involved. The thing we address first and foremost in every situation, however, is safety. We assess the risk involved and make sure things are as safe as possible for us and for the people involved. That’s the part of each and every call that’s the same.

Q: What happens after that?
A: Once the scene is considered safe, we do what we can to help. Our goal is to save lives. If a person is trapped in a car following an MVA or if they’re inside a burning house, firstly we’ll do whatever we can to get them out. Then, we try to conserve as much property as we can.

Q: What are some major calls you’ve been involved in?
A: The worst fire I’ve ever been to happened a number of years ago when two young lads lost their lives. Fire broke out in a home just over here behind the funeral home. We managed to get the fire out, but when we arrived the flames were already coming out of the windows. At that point, we knew it wasn’t looking good for anyone inside. It’s a very slim chance for anyone to still be alive when a fire has reached that point.

Q: How do you prepare yourself for the possibility of such situations?
A: You’re never prepared for something like that. One thing I have to say about the fire department, the fire department system and emergency medical services, though, is they had counsellors available to debrief us. That really helped because, in our case, we were able to talk with people from the fire service – people who actually knew what we were going through. It was difficult because, at the time, my own children weren’t much older than the kids who were in that house.

Q: Do you have any other unique memories – good or bad – from your firefighting career?
A: The most memorable fire call I responded to was my very first one. I hadn’t been with the fire department for very long and one of the first training courses we took was our self-contained breathing apparatus (SCBA) training. The chief told us, while it’s important training to have, not to worry about getting everything perfect the very first time because it would probably be a while before we’d have to go into a burning house. The very next call we got was a house fire on the Flying Dust reserve. When we got there, Russel said we needed one more guy on the inside. Then he said, “Kim, air up. You’re going in.”

Q: What was that experience like?
A: I was part of the search crew. The attack crew was already inside fighting the fire, but some of the neighbours figured there could be some kids inside. My partner and I went in and it was quite an experience. On one side you have guys battling the fire and here we are just walking right past them. Thank goodness it turned out no one was inside, but I’ll never forget what that was like.

Q: Have you ever had any close calls in terms of your own safety?
A: Not really because both chiefs – Russel and Neil – would never send us into a situation they weren’t willing to face themselves. We are also trained to know what to watch for to help ensure our own safety.

Q: What sort of training is involved when you’re a firefighter?
A: Our training is continuous. There’s the basic Firefighter 1 course we’ve all taken at different times and which the newer guys are taking right now. We also take refresher courses from time-to-time in order to stay on top of things. And, when new firefighting technology is introduced, we learn about that. We attend fire practice every two weeks – I’m also an instructor – and there are modules geared toward rookies to help get them train a little quicker.

Q: Are there any further examples?
A: Every so often we’ll send some guys to places like Humboldt for fire school. Next weekend, we’ll be taking part in SCBA training. On Saturday we’ll be doing all the classroom work while Sunday will be for the practical work. We also stage controlled burns at times and we have an ice rescue squad during the winter months, but that includes more than just firefighters. It usually includes a Ministry of Environment officer, as well as a few of the ambulance guys.

Q: What’s the significance of Fire Prevention Week?
A: Fire prevention should be promoted year round, but to have one week where special emphasis is placed on it in order to raise awareness is very important. It’s so easy to prevent so many of the fires we see. It’s also so easy to prevent the unnecessary loss of life.

Q: What’s the number one fire prevention tip you’d like to share?
A: Actually there are about two or three really important ones that jump out at me. If you have young children, make sure they know where to go and what to do if there’s a fire in the house. Make sure your family has an escape plan. Also, be sure you have working smoke detectors in your house and just use common sense. If your children are young, buy those plug protectors you place over the outlets – that kind of stuff. An ounce of prevention is worth a pound of cure.

Q: When not fighting fires, what do you do for work?
A: I work at Meadow Power and Equipment. I’ve been there 24 years. For 23 of those years I worked in the parts department, but now I’m a warranty writer and a GPS specialist.

Q: What do you enjoy most about your job?
A: The people I work with and the customers I deal with. Both are a great bunch of people.

Q: Where are you from originally?
A: I was born and raised in Meadow Lake. I love the community. It’s home and I couldn’t see myself anywhere else.

Q: What did you do after high school?
A: I gave university a try. I attended for about six months, but decided it wasn’t for me. I came back to the area and worked on some farms for a couple of years before getting my first parts job at Aurora Automotive. I worked there for about five years before starting at Meadow Power and Equipment.

Q: Tell me more about your family.
A: I have two children. My daughter, Courtney, is married and currently lives in Drayton Valley, AB. My son, Steven, lives in Saskatoon, but works in Foster Creek, AB as a scaffolder. My wife, Christine, and I met on Facebook. She’s from Topeka, Kansas, but we moved her up here last November. She just loves it here.

Q: Christine is a firefighter too, isn’t she?
A: Yes, she’s a rookie. Actually, she’s more or less a volunteer in training, but for us to be able to do this together is awesome.

Q: Do you have any words of encouragement for people who may be considering a firefighting career?
A: Great, come on down and see Neil. We’re always looking for new members.