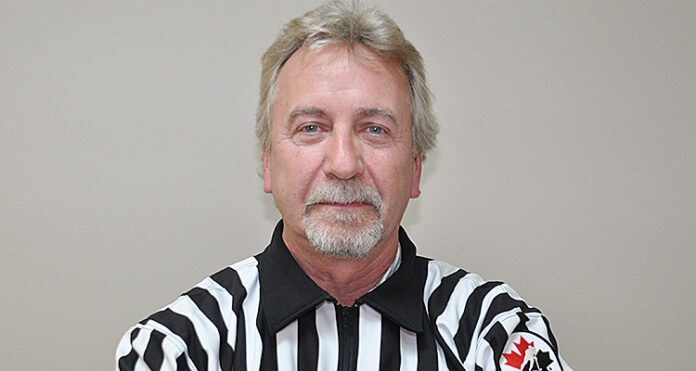 With close to 40 years of hockey officiating under his belt, Meadow Lake resident Lyle Unger is happy to be back on the ice after a brief hiatus. Recently, Northern Pride spoke with Lyle about refereeing, his career at the pulp mill and his love for the Toronto Maple Leafs.

Q: Are you originally from the Meadow Lake area?
A: No, I was actually born in Moose Jaw and my family moved to Allan, SK when I was about 10 years old. I lived there throughout my high school years and then I moved to Saskatoon and worked at Allan Potash Corp. until 1991. That’s when I came to Meadow Lake – 24 years ago.

Q: What brought you here?
A: The pulp mill opened that year and I had an opportunity to come here for work. My family and I love it up here.

Q: Tell me about the type of work you do.
A: I’m a journeyman millwright and also an engineering technologist. My job in Allan was engineering technologist while, at the pulp mill, I became a maintenance supervisor. But, in 2002 there were cutbacks – or perhaps you could call it downsizing – at the mill, so I ended up taking a job at Weyerhaeuser Pulp and Paper in Prince Albert. I still lived in Meadow Lake and would commute to work each day. From there, I worked at the Tolko OSB plant here before going up north to work for Cameco’s Rabbit Lake operation. In 2011, another opportunity to be a maintenance supervisor at the pulp mill presented itself and I’ve been back there ever since. I’m happy to be back – it’s nice to be able to be back home at night.

Q: Why is the pulp mill the right fit for you?
A: I just really enjoy working there. Meadow Lake Mechanical Pulp is a great company, they have a good management team and I really enjoy working with my crew. We’re non-union, so we do whatever it takes to get the job done. It’s a really nice atmosphere and a job that really matches my background.

Q: You also referee hockey. How long have you been doing that?
A: I started officiating with my twin brother back in the 1970s. We did it together for a few years, then I played hockey for a bit before getting back into refereeing in 1981. I was very fortunate to have been able to ref every year from 1981 to 2009. I worked my way up to a Level 4 position officiating everything from junior hockey to senior hockey, Midget AAA all they way down to Novice. I only quit in 2009 because I was working in the North at the time and refereeing interfered with my personal life. Now, with things a little more stable, I’ve started to officiate again this season. It’s nice to be back – I really enjoy being on the ice.

Q: Does your officiating career involve a lot of winter travel?
A: Not anymore, as I’ve decided to stick to the local rinks. In the past I travelled a bit, but I was very fortunate to never have run into any serious problems. I think I hit maybe two snowstorms in my entire career, but the most that happened is I may have been delayed by about an hour or so. My wife used to worry more than I did about it.

Q: What about rule changes? Things must be a little different than they were when you started out.
A: I’ve been officiating for close to 40 years and I’d say the rules have actually become a lot easier for referees than they were in the past. Before, you had to have a real feel for the game, but now things are much more clear cut. A trip is a trip, a hook is a hook. I also find, since the rules have become stricter, the hockey itself has become a lot faster and better. Removing the centre red line has sped things up and there’s now zero tolerance for checking from behind or checking to the head. When you’re out there, you actually see a lot of today’s younger players thinking about these things instead of going through with them. I also like the modified three-man system with two referees and a linesman. It makes it a lot easier to call the game.

Q: Is verbal abuse from coaches and fans still a problem for hockey officials?
A: It used to be a big problem, but Meadow Lake was the first arena I refereed in where I could stop a game and remove a verbally abusive person from the rink. It isn’t a rule, but is something the rink supported. Over the years, I believe things have got a lot better in terms of verbal abuse because fans, coaches and communities just won’t put up with it anymore.

Q: That sort of behaviour must be tough to deal with, especially for young referees who are just starting out.
A: It has been tough for young kids to get involved because of that sort of thing. But, the advice I always give young officials is to be confident and to know the rules. I also tell them not to be afraid to make mistakes. I’ve been refereeing for all these years and I still make mistakes.

Q: How do you prepare for a game?
A: I’m usually at the arena about 45 minutes beforehand. Even though I’ve done this for a lot of years, I still get anxious and, like anybody else, I want to do a good job. I do a lot of stretching before going onto the ice and I really start to think about the game. I’ll talk to people in the lobby, get dressed and then talk with the other officials. Really what I’m doing is getting my head clear and focused on the game.

Q: Tell me about your time as a player.
A: I played when I lived in Allan – Peewee, Bantam, Midget and a couple years of senior hockey. Due to an injury, however, I had to give it up. I still wanted to be involved, so that’s why I got back into officiating.

Q: Do you see as many injuries in minor hockey today as you may have in past years?
A: When I played, there was less protection. You see fewer injuries now, I believe, because those in the know realized something had to be done with regard to the penalties that can really hurt people. Hockey in general has become much more aware of the potential for danger.

Q: What about the popularity of the sport? Has it endured?
A: Talent-wise, the kids today are very good, but I think the sport’s popularity has dropped off somewhat. That’s not a reflection of hockey itself, but back in the day almost every kid in every small town played hockey. Today, there are a lot more opportunities for kids and more choice when it comes to things they can become involved in.

Q: What are your thoughts on the recent loss of the Meadow Lake Senior Stampeders?
A: It’s very unfortunate. The Stampeders have a really strong fan base, and I hope we’ll have a team again next season. It’s a big loss for the community. Stamps games were always something people could go to on a Saturday night, and it was really good hockey. I guess the geographical position of Meadow Lake makes it tough to get into a league, but we’ll have to wait and see what happens.

Q: Do you have a favourite professional team or player?
A: Wayne Gretzky was always my favourite player and my favourite team is the Toronto Maple Leafs. Hopefully Babcock (head coach Mike Babcock) can straighten them out, but I’m sure I’ll get bugged about this.

Q: Considering the feelings a lot of people have about the Leafs, how do you weather such a storm?
A: I keep saying to just wait. Their time will come. It may take a few years, but they’ll get there.

Q: Tell me more about your family.
A: My wife, Laurie, works part-time at Meadow Mouse Flowers ’N Things. We both love to camp and fish – that’s our summer pastime. We have two daughters – Raedene and Breanne – who are both married and living in Calgary. Our son, Josh, lives in Cold Lake and we have a granddaughter, Sadie, who was born in July.

Q: What’s it like to be a grandfather?
A: It’s absolutely awesome. It’s difficult to put into words, but we can never wait to see her. We do get daily photos and updates. FaceTime has been a great tool for that. We get to talk to her a lot on FaceTime.