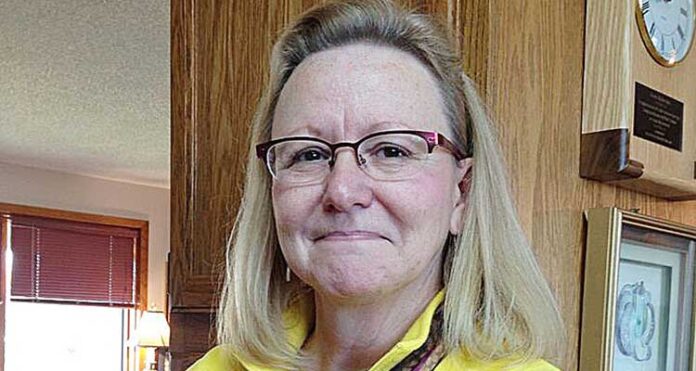 With her youngest child serving in the Canadian Armed Forces, La Ronge resident Karen Robertson appreciates the importance of Remembrance Day. Recently Karen spoke with Northern Pride about her son, her career as a teacher and her love for the written word.

Q: Why is Remembrance Day as significant to you as it is?
A: I’m actually from a military family. In addition to my son, Angus, who is currently serving, my father was in the military as were both my older brothers. One of my brothers actually served in all three branches of the military – army, navy and air force – at different points in his career, while the other retired as a full colonel. And, before we moved to the North, all the kids in my family were involved in air cadets. In fact, I was among the first group of female air cadets they ever had in Regina.

Q: It sounds like the military certainly is somewhat of a family tradition.
A: Yes, the military is a very important part of our lives and we support it greatly. Angus joined five years ago and, today, he’s earned the rank of corporal. He works as a communications systems technologist, which essentially means he’s responsible for the set up and maintenance of any kind of communications device whether it’s mobile or fixed. He’s currently stationed in Montreal as part of what’s called a support unit.

Q: Even though your family has a military background, how did you feel when you learned he was enlisting?
A: I had feelings of pride, but also feelings of trepidation at the same time. Five years ago, Canada was still in the midst of the conflict in Afghanistan. Soldiers, of course, hope to be deployed to combat areas because that is what they’re ultimately trained for, but he was only 20 at the time and may have had some grand notions. Yes, I was proud, but also somewhat fearful. Any time you send your kids out the door it feels awful, but the prospect of having one of them deployed to a war zone is a frightening experience for a mother, or any parent for that matter, to endure.

Q: Did he ever end up going overseas?
A: No, but there were a couple times when he contacted me to say it looked as though a deployment to Italy might come his way. This was when all that business was going on in Lybia, and he thought there might be a chance he would go. He was completely up for it, but it didn’t end up happening. My brother, however, did serve six months in Afghanistan at the start of the war. We all felt awful for him at the time, but he told us that was what he’d trained his whole life for.

Q: Where has Angus served thus far?
A: Before being stationed in Montreal this summer, he lived and worked in Edmonton. Before that, he was in Petawawa, ON and, earlier on, he completed his basic training in Borden, ON, as well as his soldier qualification course in Meaford, ON. While he was in Petawawa, he had a really cool opportunity to be part of a PAT platoon. He was waiting for a job in his trade when he was asked if he would be interested in spending the summer as a grenadier guard in Ottawa. He went and did that – he was one of the guys in the furry hats you see on Parliament Hill. While he was in Ottawa, Prince William and his new wife (Catherine, Duchess of Cambridge) came to Ottawa July 1 and he was part of the parade that marched past them that day. We even have a photo from that day and you can see the prince and his beautiful new wife right there as he marches by. He’s often said it was a top honour, as well as a lot of fun.

Q: That is quite an honour. Has he had any other experiences that stand out to you?
A: Last year, while Angus was living in Edmonton, Cpl. Nathan Cirillo was killed while guarding the Tomb of the Unknown Solider in Ottawa. After that, Angus applied and was selected to serve as an honourary guard at that same location. He served there in May and June of this year.

Q: Now that certainly must have given you a strong sense of pride.
A: It did, especially considering our family’s strong military ties. My son just loves what he does so much and for him to be able to fill this role was an incredible honour. Not only was he paying homage to the person who is buried at the Tomb of the Unknown Soldier, but to Nathan Cirillo and everyone else killed in the line of duty. My husband and I took a week off and went to Ottawa so we could see him. It was amazing.

Q: What are your plans for Remembrance Day?
A: It depends on the weather. If it’s terrible outside, we’ll probably stay home and watch the national service on TV. Last year, we went to the local service in La Ronge. They march from the cenotaph here in town to the Friendship Centre for the ceremony. It’s always great to be there.

Q: What do you do for a living?
A: I’m a retired teacher. In fact, I was Derek’s (Northern Pride reporter Derek Cornet’s) English teacher. I’ve just started my third year of retirement, however, and I’m really enjoying myself.

Q: What made you decide on a career teaching English?
A: I’m a voracious reader. It’s almost like an addiction – I just love books, fiction and non-fiction, and to be able to pass on some of that love for literature to young people is great. Teaching never felt like a job to me. I also like to write poetry and non-fiction. I taught a creative writing course for 15 years.

Q: Do you have a favourite book or author?
A: When people ask me that question, I always have a difficult time answering it. So many books have been so pivotal to me. One that stands out is Catcher in the Rye by J.D. Salinger because it was the first adult book I read. Well, actually my father read it to me. He was an actor, writer and artists who really instilled a love for the arts in us. When he read that book to me, I was hooked. Even when I was teaching, I always let the students choose the books they wanted to read because everyone has his or her own likes and dislikes. There’s no use trying to fit a square peg into a round hole. I also really enjoy Harper Lee’s To Kill A Mockingbird while Margaret Laurence is also another favourite author of mine. In the last few years, I’ve also taken a strong interest in aboriginal authors. It’s hard to pick an actual favourite because I read so much.

Q: It sounds like your father was a pretty impressive guy.
A: He sure was. As a matter of fact, he started The Northerner, the weekly newspaper in La Ronge, back in 1974. He sold it in the early 1980s and died in 1985, but I was definitely sad when the paper closed down earlier this year. Sure people have their iPads and whatnot these days, but there’s nothing better than holding an actual newspaper in your hands, spreading it out on the counter, clipping things out – it’s great. That’s why it’s nice to see the people who run the newspaper in Meadow Lake making an effort to provide La Ronge coverage. A local newspaper is important for any community.

Q: Tell me more about your family.
A: My husband, Scott, runs a store in La Ronge called Robertson Trading. When you step inside, it’s like stepping into the past. It looks just like an old fashioned fur trading post. Scott is a fur buyer as well, a skill he learned from his father.

Q: Where did the two of you meet?
A: We met in high school and both attended university in the south before returning to La Ronge. In addition to Angus, we have two daughters. Our oldest, Alexandra, followed in her mother’s footsteps and has an English and history degree. She currently teaches in Moose Jaw. Our other daughter, Jane, is going to school in Saskatoon where she’s taking a combined X-ray technician/lab program at SIAST.

Q Have you always lived in La Ronge?
A: My husband came here when he was eight years old and my family moved here when I was 14. My parents originally came here for work and, at the time, I thought we were moving to the ends of the Earth. I had just started high school in Regina and could not believe he was doing this to us. But, as kids always do, I quickly made new friends and just settled into small town life. La Ronge is a lot bigger now than it was then, but there’s always been so much to do in terms of the outdoors. We have a cabin we like to spend a lot of time at during the summer – it’s wonderful. I can’t imagine living anywhere else. We’ve have deep roots here now and it wouldn’t be easy to pull them up.