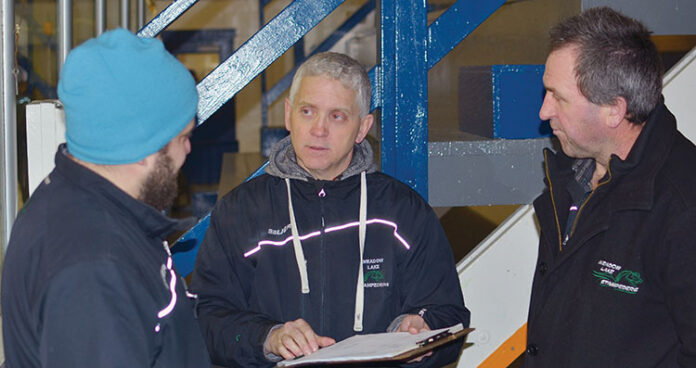 If two heads are better than one, four must be even better still.

That’s the philosophy the Meadow Lake Midget AA Stampeders’ coaching staff adheres to as the foursome – which includes Gary Vidal, Marlon Dancy, Mike Radford and Len Esau – works tirelessly throughout the season to help players improve their individual skills and to better the team as a whole.

“We have a team of coaches and coach as a team,” Radford explained. “If someone were to ask who is the Meadow Lake Stampeders, we would say it is not any one player, it is all 19 players. How could you ask your team to play as a team if you yourself are unwilling to coach as a team? This, in my opinion, has helped to cultivate a team concept and mutual respect. We can only have success if all players and coaches buy into that plan.”

Dancy agreed, stating the team concept of coaching is something that was originally implemented last season.

“Personally, I think it has worked very well,” he said. “Each coach brings something to the hockey team. As a group we have had no issues on coming up with an overall plan and system to teach our young men the kind of game we want them to play. As coaches, you are always trying to make the team better. Our record isn’t where we want it to be, but at the start of the year our goal was to make the playoffs and we achieved that goal. Now we just have to prepare for the playoffs because this is a brand new season and anything is possible.”

“Each individual brings different strengths and weaknesses to the group and I think we have tried to take advantage of one another’s strengths to benefit the whole team,” Vidal noted. “We have definitely made mistakes and are far from perfect, but I think we all believe, when you don’t care who gets the credit, you can accomplish great things. The benefit is, we are able to divide the work and the heartache that comes with the job at times, but we get to multiply the benefits and the joy we experience together when we have success and see the growth of our players as young men.”

Esau is the newest member of the coaching staff, having joined the team after the season was already underway.

“The coaches with the AA Midgets have a common interest in seeing the team play as well as they possibly can and we are all very cooperative to achieve that goal,” Esau said. “We all have opinions, but I find not one of us gets bent out of shape if the group does not agree on an idea or direction taken. Coach Radford has been the practice organizer and director while Gary has been more of the general manager. Radford oversees the defence during games while Vidal oversees the forwards. I have been a sounding board between the two, but have more or less been helping the defence. Coach Dancy works alongside Gary with the forwards.”

Meanwhile, the Meadow Lake Midget AA Stamps emerged victorious by a score of 4-2 in Game 1 of their opening round Centre Four Hockey League playoff series against the Battleford Barons. The action took place Wednesday night (Feb. 24) at the Meadow Lake and District Arena.

Although Battleford opened the scoring early with a goal at the 15:01 mark of the first period, Cody Trimble answered back for Meadow Lake at the 12:56 mark. Battlefortd would take a 2-1 lead by the first intermission, but three Meadow Lake goals in the third courtesy of Alex Vidal, Shane Hounsell and Jadyn Trimble cemented the win for the home team.

“We’re really proud of how our guys stuck with it last night,” Gary Vidal noted Thursday morning. “We thought we out=played Battleford for the whole game, but it took a very strong effort in the third period by everyone – including a couple of huge saves – to secure the win. This is the first playoff win any of these boys have ever earned in Midget hockey, so it was real rewarding for them.”

Game 2 in the best-of-three series is set for this Saturday in Battleford. If necessary, Game 3 will also be held ion Battleford on Sunday.