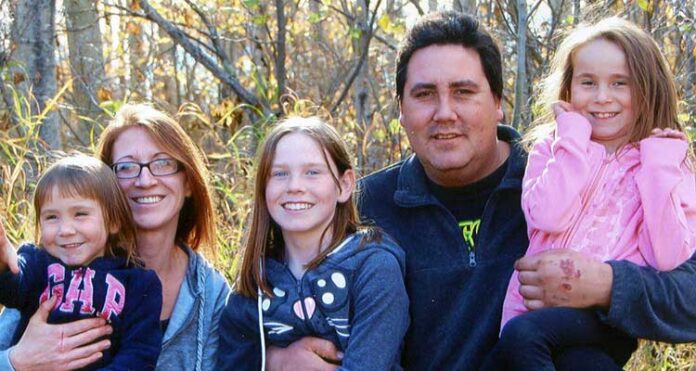 Friends and family of a Meadow Lake man severely injured in a recent snowmobile crash near Beauval say he’s lucky to be alive.

Corey Sergeew was transported to the Meadow Lake hospital and later airlifted to Saskatoon after flipping his snowmobile several times Feb. 6 while riding with a group of friends and acquaintances around 9:30 p.m.

“About six of us went snowmobiling from the Waterhen River to Beauval,” explained snowmobiler Tyson Youst who witnessed the crash. “We were on our way home when we got caught in a rain and snowstorm, which made it very hard to see.”

According to Sergeew’s wife, Linda, it’s uncommon for her husband to ride his snowmobile after dark.

“When he wasn’t home around the usual time, I was afraid something might have happened,” she remarked. “I just kept trying to phone him over and over again.”

Sergeew went on to say the rain and snow likely made it very difficult for the riders to see.

“Corey came up an embankment and must have hit an ice bump or something, which flipped his snowmobile four times,” she said. “He didn’t let go, but maybe he should have because the sled came down on him and broke his sternum. He also fractured his C2 vertebrae in his neck, as well as his C4 and T6.”

She also said, according to doctors at Saskatoon’s Royal University Hospital, the only reason Sergeew wasn’t killed as a result of the crash is because of his large, physical frame.

“They said, if Corey wasn’t so big, it would have likely crushed his lungs and heart, and he wouldn’t be here today,” she said. “He’s very lucky.”

Sergeew is expected to remain in a neck brace for at least six to eight weeks, but was able to return home late last week. His wife has been providing constant care ever since.

“We have a hospital bed at the house and a lift chair,” Linda Sergeew noted. “He’s not allowed to move his neck or body, and he can’t get up without using a walker. He does walk around a little each day, though, to get his exercise.”

Meanwhile, in the wake of the recent crash, Northern Lights Snowmobile Association president Cindy Gottlob is reminding her fellow snowmobilers of the importance of being safe and the need to follow certain rules while on the trails.

“I wish him and his family well,” Gottlob said. “This incident did not happen on our trail system, but our trails are actually closed right now because of a lack of snow. That doesn’t mean people still can’t go on the trails, it just means we’re not liable if something bad happens. People just need to be careful out there.”

Linda Sergeew agreed about the overall lack of snow throughout the area.

“Even Corey said there really wasn’t enough snow to be riding,” she said.

She also stressed how grateful her family is for the level of support shown following the crash.

“We’re the type of people who like to be there for others, not the type who like to accept help from other people,” she said. “When you don’t have an option to say ‘no’, it’s hard. But, we really appreciate everything everyone has done. I’m still sort of numb – it’s all been so overwhelming.”