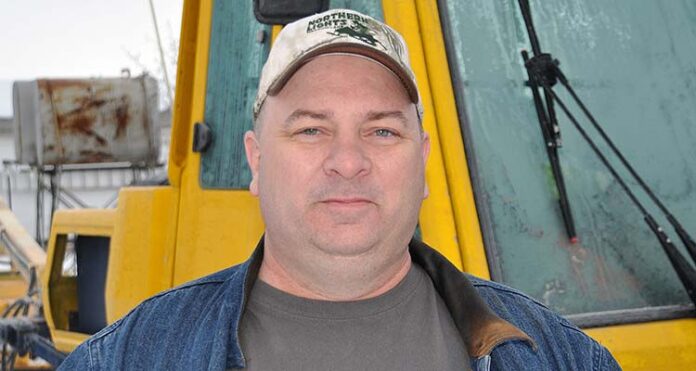 Between operating a honey farm west of Meadow Lake and grooming hundreds of kilometres of trails on behalf of the Northern Lights Snowmobile Association, Calvin Groot is a busy man. Recently, Calvin spoke with Northern Pride about his work, his family and his love for movies.

Q: What’s your connection with the Northern Lights Snowmobile Association?
A: Right now, I’m the club secretary. I’ve probably been with the club for the last eight to 10 years. It’s an organization that, at the time, needed to move forward, so (current club president) Cindy Gottlob and I joined up and have done our part ever since to help make that happen.

Q: I understand you’re also the trail groomer for the association.
A: Yes, I do all the maintenance on the snowcat and all the grooming hours that go along with operating it. I also do most of the signage – I post the signs along the trails. There are always signs that need to go up because they get damaged or sometimes go missing. And, I make sure the trails are clear of any branches, trees or other debris that may have fallen. Our association is responsible for about 300 kilometres of trails in total, which is quite a lot.

Q: Is it expensive to continually replace missing or damaged signs?
A: We usually spend anywhere from $5,000 to $10,000 a year on signs and posts. It’s important, though, because we need to get perfect marks on the report card issued to us by the provincial trail inspectors. I’m a trail inspector too, but I’m not allowed to inspect our own trails. This year, I’ll be inspecting two trail systems – one near Candle Lake and another close to Big River.

Q: How is your group funded?
A: Without SGI, we wouldn’t exist. When you plate your snowmobile, SGI automatically puts a portion of that money into a fund that helps us with signage and to maintain the snowcat. It didn’t used to be that way when all we had to rely on was money raised through the sale of memberships. People would often ask why we weren’t maintaining the trails, but we were only operating on about $5,000 a year back then compared to the $35,000 to $40,000 we have to work with now. SGI helps, but, of course, it means we also have to follow certain rules and regulations and, if we don’t, there are consequences.

Q: I’ve heard the trails were actually closed recently because of a lack of snow.
A: One trail, the one to Chitek Lake, is actually closed for the entire season because of ongoing pipeline work. The pipeline was put in around 1968, and repairs are long overdue. The collars need to be replaced. And, yes, there is a lack of snow this season, which has made it difficult to ride. The snow came very late.

Q: Have you had a chance to go snowmobiling much yourself this winter?
A: No, not this year, but it is something I enjoy when I’m able to do it. I do plan to attend the Saskatchewan Snowmobile Association’s Winter Festival in North Battleford at the end of the week. Last year it was held in Yorkton, but this year it’s in North Battleford.

Q: I imagine you’d rather be riding the trails than grooming them, though.
A: Yeah, it’s an unforgiveable job and not so fun when you’re only going five miles per hour for 30 hours straight on the groomer. What I do enjoy are the comments I receive from the riders I meet on the trails and in the coffee shops. They appreciate the quality of work I do and the extra steps I take to make the trails better.

Q: I’m sure it’s nice to provide them with a smoother ride, but is there also the safety factor to consider?
A: Absolutely. It’s very important to keep the maintenance up on the trail system. A simple thing like a branch hanging over the trail can be a distraction and lead to injury or worse. It’s very important to take these things seriously. We want everyone to come back in one piece, happy and with smiles on their faces.

Q: When not on the trails, what else do you do for a living?
A: The rest of my time is mostly spent here at the family business, Groot’s Honey Farm. I’m one of the owners, along with my parents Keith and Tina Groot, and at this time of year I’m usually busy making a lot of deliveries to places like Lloydminster, Turtleford, St. Walburg and everywhere in between.

Q: Certainly Groot’s honey is a very popular product.
A: Yes it is. This past year, we probably went through about 50 barrels, which is about 32,000 pounds of honey. And, that’s just the local deliveries.

Q: You also sell the honey elsewhere?
A: Some of it is sold local, but the rest goes to the Alberta Honey Co-op and, from there, is sold pretty much everywhere as BeeMaid Honey.

Q: How long has the business been around?
A: Groot’s Honey Farm started in 1972. Before then, my dad was partners with another guy from Lashburn.

Q: What does it take to maintain such high numbers?
A: That’s the thing – you can’t maintain it. It’s all in Mother Nature’s hands because we depend so much on the weather. You have your good years and your bad years, just like farming. But, to be self-sufficient, it’s important to have good communication with the farms you have your bee herds on.

Q: How many others work at the honey farm?
A: We have six foreign workers – two from Mexico and four from the Philippines. We’re also looking to bring my wife’s two older brothers over from the Philippines as permanent residents. They’ll come work for us and will hopefully be here by summer.

Q: Why are you such a strong supporter of the government’s foreign worker program?
A: We always need help in the summertime and, even though we’d like to hire local, there aren’t very many people looking for seasonal work. We are a seasonal operation, and we can’t compete with oil field wages – nobody can. It works out well for us this way because we don’t have to worry about unemployment. At the end of the season we can send them home. They’re also hard workers, that’s why we bring back the same people every year. It’s nice they come back because it means we don’t have to retrain them. Sure, it would be nice to hire locally, but sometimes you don’t have a choice.

Q: Tell me more about your family.
A: My wife, Odena, is from the Philippines. We have a son, Reise, and another baby on the way.

Q: How did you and Odena meet?
A: I met her through our foreign workers. The first year they were here, they asked if I would come visit them when I had some time off. I did, but before I went they would talk to me a lot on the Internet. They had met this lady at the Internet café they’d got to all the time and figured they’d introduce her to me so I’d know someone other than them while in the Philippines. That was Odena.

Q: Have you been to the Philippines since?
A: Yes, lots of times. It’s a very friendly place – the people are very welcoming. It’s also a very affordable place to visit. The most money you’ll spend is on your flight. Once you’re there, costs are very reasonable. While there, I’ve also had meetings with officials from the Beekeepers Association of the Philippines. They’re doing everything they can, but it can’t compare to what we can do over here. Canada has billions of acres of flowers whereas they do not.

Q: Considering how busy you are, do you have time for any hobbies or pastimes?
A: Not really, aside from spending time with my wife and son. We like to go to the lake and do some fishing and camping. We also go to the city when we have a chance and I like to get to the movies as often as I can.