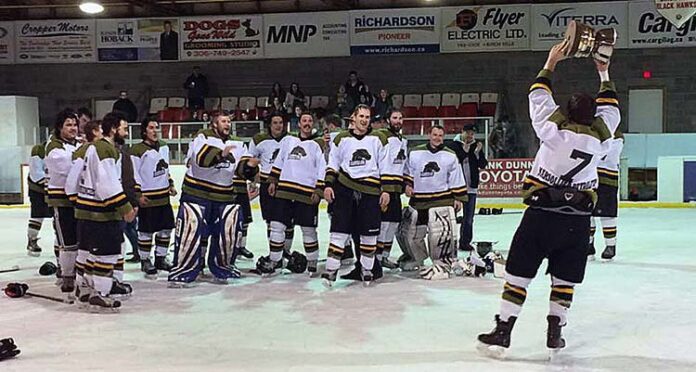 The Meadow Lake Broncos are this year’s Beaver Lakes Hockey League (BLHL) champions, their first league title win since joining the league in 2012-13.

The Broncos entered playoffs as the top ranked team in the league and continued to dominate the post-season action. At first, it appeared they would sweep the championship series, but hopes of winning the title at home were dashed the previous weekend when Birch Hills gained a 2-1 victory at PineRidge Ford Place on Flying Dust First Nation in Game 3. When contacted last week, Broncos goalie Rick Dallyn said it would have been nice to win at home considering the large crowd on hand.

“The fans are the ones who’ve supported us throughout – that’s what home ice advantage is all about,” he said. “But, I have absolutely no problem with us winning it in Birch Hills.”

For the full story, see next week’s (March 24) print edition of Northern Pride.