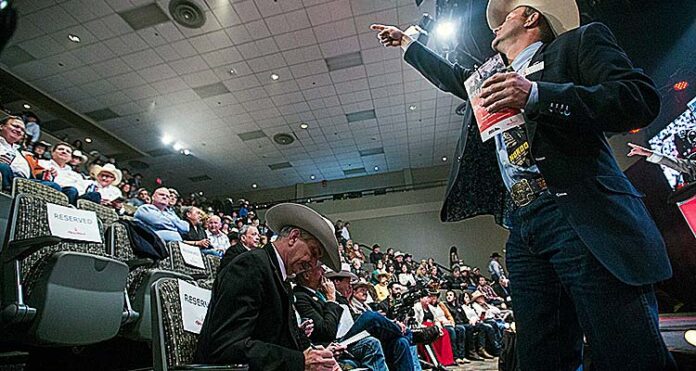 Logan Gorst has come a long way. Embarking on his fifth season with the World Professional Chuckwagon Association (WPCA), the Meadow Lake driver is now considered to be amongst the elite in his sport, something that was evidenced March 17 at the annual Calgary Stampede canvas auction.

Gorst received the second highest bid of the night in terms of sponsorship money heading into this summer’s races in Calgary when he secured $115,000 from PCL Construction Management Inc. PCL’s bid was only $5,000 short of the $120,000 Tsuu T’ina Nation placed on last year’s Calgary winner and WPCA champion Kurt Bensmiller.

“I’m very happy with how things turned out at this year’s auction,” Gorst remarked. “I didn’t expect such a high amount considering the downturn in the economy, but it just goes to show how respected the sport and how supportive the sponsors continue to be.”

Gorst’s total for 2016 is much higher than what he received last year when PCL provided him with only $65,000.

“I think the fact I made it to the $100,000 dash last year really improved my chances for sponsorship,” he said.

Last week’s auction saw more than 180 groups and organizations come out to bid for the opportunity to advertise with the 36 drivers who will be competing in the 2016 GMC Rangeland Derby during the Calgary Stampede, July 8-17. Auction proceeds totalled $2,297,500, a slight decrease over last year’s   $2,782,000.

“We are pleased so many amazing people in our community believe in the importance of supporting these drivers,” stated Paul Rosenberg, the Calgary Stampede’s chief operating officer. “Even in challenging times, the cultural, historic and sporting significance of chuckwagon racing is being recognized.”

Gary Gorst, who received $70,000 in sponsorship funds for last year’s Stampede, said he’s surprised, yet pleased with the how things turned out. He also said he’s looking forward to the opportunity to start training.

“As soon as we’re rid of all the white stuff, we’ll be able to get going full tilt,” he said.