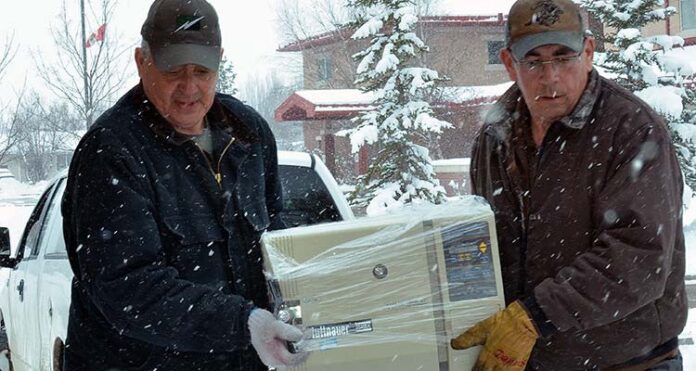 Medical supplies deemed non-essential in the Northwest will have a tremendous impact for those living in war-torn Rwanda.

Retired nurse June Menard has been collecting supplies for more than 14 years with the goal of having them sent to developing nations. She sends items to Food for the Hungry in Saskatoon once every four months, which has access to a massive 13,500-square-foot warehouse to store equipment from across Canada. The latest parcel, however, also included donations from the health centres in La Loche and Ile-a-la Crosse, in addition to the hospital in Meadow Lake.

Items donated from La Loche included heavy equipment such as a ventilator with multiple parts, oxygen concentrators, TV monitors, a centrifuge that spins blood and an isolate for newborns. Ile-a-la Crosse donated mostly syringes and needles, while Meadow Lake sent wheelchairs, walkers and crutches. Menard said those in Rwanda receiving the equipment are amongst those most in need.

“There’s a civil war going on there – it’s nasty and the little hospitals are full all the time, and they’re short of everything,” she remarked. “I’ve seen it. They haven’t got what we do – they just don’t have it.”

Menard spent some of her career as a nurse working in the medical field in Africa and India and was present when such a shipment of supplies arrived. She was working in Guyana at the time and said, when the donations were unloaded, people would play drums and dancers would celebrate. Menard described the level of happiness as unbelievable, which is why she’s remained involved year-after-year.

In her experience, Menard said the health care situation in some African countries is so dire, three premature babies would share an isolation chamber built for one. She noted, even though she’s been helping to alleviate the problem for more than a decade, there are a lot of volunteers involved as well.

“Sure, I’m in charge and I prepare this stuff, but I sure need help to pack it,” Menard added. “I use the basement of my house and the Masonic Lodge to keep donations. I’ve also had members of the Meadow Lake Lions Club and United Church help haul it.”

On March 22, the donations from the Northwest were transported at no charge by Jay’s Transport and arrived in Saskatoon. The items will be inspected by a biomedical staff who will assess them and also refurbish them if needed. Judy Johnston, the inventory and equipment manager at Food for the Hungry, said donations are then sent to countries based on a submitted wish list.

“There’s a lot of places in desperate need of medical and dental equipment,” she commented. “They’ve asked for X-ray systems to ultrasound machines. We know of instances where doctors were reading X-rays by holding the picture out the window up to the sun.”

The organization sends about one container per month, but has sent 300 in the last 16 years. If the items weren’t donated, they’d either be sold or scrapped.