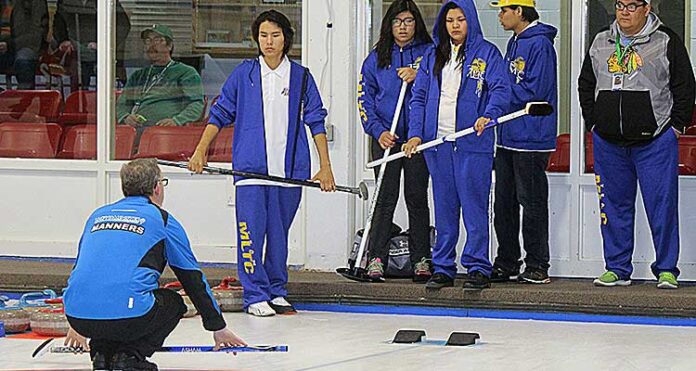 The 2016 Saskatchewan First Nations Winter Games are underway and have attracted more than 3,400 athletes.

Onion Lake Cree Nation is hosting the event, which started March 27 and wraps up tomorrow (April 1) at the reserve and several locations in Lloydminster. This year, there are 290 athletes representing Meadow Lake Tribal Council (MLTC) and 291 athletes from Team Woodland. They are competing in a range of sports including broomball, badminton, basketball, hockey and volleyball. Table tennis is the demonstration sport this year and some athletes from the North participated in that as well.

On March 28, the sheets were busy at the Lloydminster Curling Club as many athletes from MLTC and Woodland were trying the sport for the first time. Leon Crookedneck of Ministikwan Lake First Nation was accompanying senior and junior curlers. They were taking part in a skills enhancement session, which was followed by a two-on-two-person challenge.

“They’re trying it out, so hopefully it catches on,” Crookedneck remarked. “I’m pretty sure we have a strong team. They’re learning as we go.”

Wilson Ballentyne of La Ronge was also supervising a team and said doing so was a last-minute decision, but he was happy to be able to attend. Even without the prior training, Ballentyne was hopeful the team could still win a medal.

“It’s a good learning experience,” he said. “They only practised twice in last couple weeks.”

Broomball was also occurring at multiple locations in Lloydminster. Colin Jacko from Waterhen Lake First Nation is coaching a team of under-14 girls who are off to a good start. They already won two games with the second against the host squad. Jacko said, even though players had just learned the rules of the sport, it takes teamwork to be successful.

He went on to say this year could be the last time broomball is slated at the event. Jacko noted the popularity of the sport is waning and fewer people are interested.

“In past years, we’ve won many medals back-to-back, but not recently,” he remarked. “We’re just getting back into it now, so we can’t count anyone out of the picture yet. It’s still early in the Games and everyone has a chance to win.”

Jacko also noted the Games have been a great experience so far and have brought many people together as a community. He said people are making new friends and memories, which is most important of all.