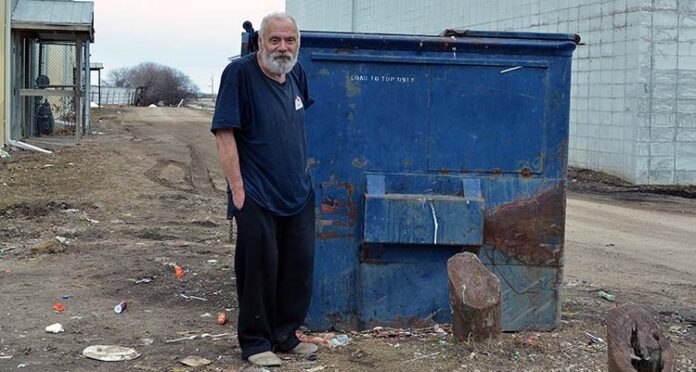 Lamon Disposal Ltd. in Meadow Lake offers clear direction when it comes to what items should be placed in garbage bins opposed to those which belong in the blue box. Of course, however, there are some things that don’t belong in either.

“I was just doing my usual thing when out of nowhere I heard banging coming from the top of my truck,” Cubbon explained. “I looked to see what it was, and there he was. He was already attempting to climb out at that point.”

The “he” in question was Meadow Lake resident Wesley Smith who said he’d climbed inside the dumpster located outside the Meadow Lake and District Arena in an effort to salvage empty bottles.

“It was early in the morning, and I was in the bin picking bottles when, all of a sudden, the bin – and me – were being lifted into the air,” Smith said. “I landed in the truck with the garbage.”

Smith, who lives near the arena, said he travels around town each week, searching for bottles he can later cash in for a few dollars at the local SARCAN plant.

“Every cent helps,” he said. “I was hoping to get enough money for a pack of smokes. Usually, I find bottles outside the arena – this was the only time I was ever in the dumpster.”

Upon discovering he’d unknowingly dumped a human being, Cubbon immediately shut down his truck, helped Smith escape his predicament and then proceeded to inform him of the dangers of climbing inside a dumpster.

“I asked if he was OK, then spent a few minutes with him just to make sure,” Cubbon noted. “He had a little cut on his hand, that’s all I noticed at the time.”

Smith, who reiterated the fact he banged on the cab of the truck as soon as he realized what had happened, also said his hand had been cut.

“My fingers were full of blood,” he added. “My back had also been sore for about a week, so this didn’t help. I just thank goodness his compactor wasn’t on at the time.”

Cubbon agreed, noting the incident could have had a much more grim result if Smith had not made his presence known immediately.

“His reason for going into the dumpster was to look for bottles and cigarettes,” Cubbon said. “I told him a pack of cigarettes is not worth getting killed over.”

He also said, newer dumpsters have stickers warning people not to climb inside, but the dumpster at the arena is an older model that does not feature such instructions.

“Technically, these bins are private property,” Cubbon added. “And, it’s just common sense – you don’t go in there. He’s lucky he wasn’t knocked out when he landed, or the end result could have been a lot worse.”

As for Smith, he said he was frightened when the dumpster began to rise into the air.

“From now on, I’m going to be more careful,” he remarked. “I’m going to stay out of the dumpster and just let the truck do its job. I can always go back to look for bottles later.”