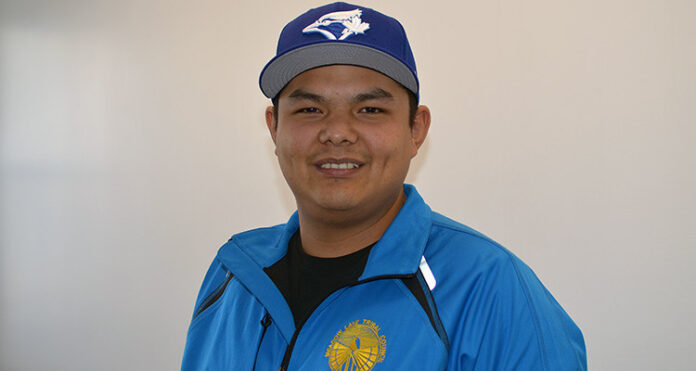 It has been a whirlwind couple of months for Flying Dust recreation director Eric Gladue, who is dedicated and committed to both his profession and his family. Recently, Northern Pride spoke with Eric about his involvement in the Saskatchewan First Nations Winter Games and his love for his community.

Q. How does it feel to come back champs from the Winter Games?
A. It feels good. With it brings bragging rights throughout the entire Meadow Lake Tribal Council community. You could say it’s a fun rivalry throughout the whole province.

Q. Why do think that’s so?
A. For starters, we are one of the bigger tribal councils in the province and at these Games we had more than 270 athletes compete. At the Winter Games, youth can compete in only one event whereas, during the Summer Games, they can compete in multiple events because in track and field you can do up to four events

Q. How often are the Games held?
A. Every two years and the Summer Games also every two years. So, we alternate between the two every year now. But, in the beginning, back when I was attending, we had Winter and Summer Games every year. I believe it just got too hectic and too costly for everyone involved.

Q. What was your role this year?
A. First let me tell you MLTC consists of nine bands, so each band had their own rec director there to oversee on behalf of their First Nation. For example, I organized the accommodations, travel and chaperones for each athlete – basically took care of the budget on behalf of Flying Dust.

Q. How many athletes?
A. Flying Dust had 22 athletes competing mostly in hockey, but we also had some in volleyball, basketball and badminton.

Q. Were you ever a participant?
A. Oh yes, I went quite a few times. I attended for the first time in 1995 in soccer at the Summer Games. They were held in Poundmaker. My last games I competed in was here in Flying Dust when we hosted in 2003. I played ball at that time. It’s something you just don’t forget. During the Winter Games I competed in both volleyball and hockey, but in different years.

Q. At that time, what did you feel you were getting into?
A. When I was a kid, it was something to look forward to. It was never only about the Games itself, but about meeting other athletes.

Q. Now, as an adult, from a different set of eyes, how do you see this event?
A. I want our youth to experience what I went through. So I encourage Flying Dust youth to get out there and try out, and hopefully experience the atmosphere of the Games. This is a great opportunity for our youth to travel and see the bigger picture as well. For me personally, it’s more responsibility now. I have to make sure the athletes get there safely, make sure there are enough chaperones, help with their luggage, their accommodations, their meals, make sure they compete and bring them home.

Q. I understand there are cultural events as well.
A. Yes, especially during the big opening ceremonies and every morning there was a pipe ceremony for anyone who wanted to participate.

Q. What are some other events you look after as Flying Dust rec director?
A. We host several fundraising events throughout the year and two that are coming up are the annual golf tournament and the Father’s Day demolition derby. All money raised for the Flying Dust Youth and Disabled Wish Foundation go back to help fund many initiatives for our band members. Every time there’s an opportunity to benefit one of our members, we look at it closely and then decide if we want to support it.

Q. What would you say is a favourite part of your job?
A. I really like working with the youth. And I really enjoy helping out in the community. Like a lot of people here, I’m involved with Treaty Days, the youth/family cultural camp at Jarvis Lake, the powwow and a lot of other events that isn’t in my job description.

Q. It doesn’t sound like your job is a Monday to Friday, nine-to-five?
A. It’s supposed to be (chuckling). But it’s flexible I guess because I have a lot of events I need to be at that are held on weekends. I make it work. I’m also a full-time bus driver.

Q. When you were in high school, did you have a career plan?
A. Actually I had no idea. I didn’t think I would be here, but everything worked out. After high school I took my process operating technician program and worked one summer at Meadow Lake Mechanical Pulp. I then went to Saskatoon for a six-week heavy duty training program and then I came back and worked at public works department on Flying Dust. I then started as a youth worker at the youth centre and from there just worked myself up.

Q. Where do you see yourself in say five years?
A. That’s a hard question. Probably still here. We are a service to our community and I like that kind of work. I’m committed here to whatever role the band directs me. I like the rink – it gets hectic at times, but I see it paying off. I see it in our youth, I see it in Meadow Lake as well. I do believe it’s benefiting both communities.

Q. Do you come from a leadership background?
A. I do. My mother, Marie, is a band councillor right now and my uncle Richard is the chief. In past leadership, Howard, another uncle, has been a councillor before and now he’s the band’s education director.

Q. Besides these three, who would you say is a mentor?
A. Even through my youth days, I’ve really looked up to Jeremy Norman. He was first here as the recreation director and then a councillor. I still go to him for advice to this day. He’s a great resource to have close by.

Q. What do you like to do in your time off?
A. I like camping and travelling whenever I get the time to. We like to go to Johnson Canyon – it’s just outside of Banff – we’ve gone there a few times now with a large group of my aunts and uncles and their families. I still like to play sports myself. I like playing ball (slo-pitch) and going out on the ice for some recreation hockey, just to stay active.

Q. In your opinion, how important are the Elders?
A. That’s where you get direction from. We do have a few I like to use from time to time with the youth. They come in and show them how to dry meat, and learn other traditional ways. Leon and Lorraine Matchee, Bob and Clara Norman and Frank and Neva Mirasty are all great elders who always make themselves available.

Q. Who is one who helped you?
A. Looking back, when I was was a kid, my great-grandmother – the late Flora Gladue – I looked up to her a lot because she was a hard worker. She was still chopping wood at age 85 and was involved in the community. One of the elders who looked out for me when I was younger was Bella Gervais. She was really good with the youth and I learned a lot from her. Another person who didn’t quite reach Elder status was Tina Merasty. I think she was in her 40s when she died, but she had a real passion for the youth. She wanted them all to succeed and always told them they could.

Q. Tell me about your family.
A. My partner’s name is Lindsay and we have two girls and one boy –  Lashonta is 13, Keisha is 12 and Deagan is nine. They’re involved in a lot of things and our goal as parents is to keep them active, so they won’t wander down the wrong path. In organized sports there’s lots of support and help for them.