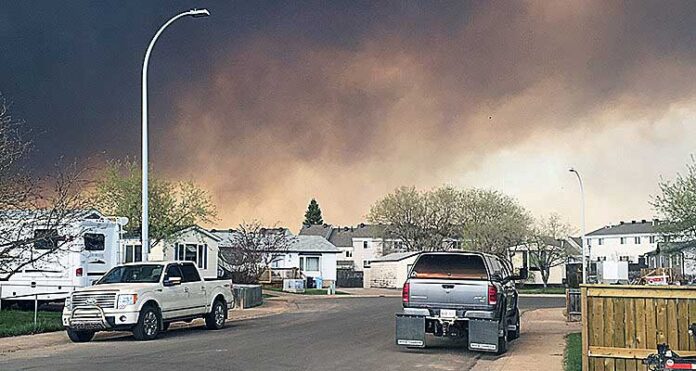 Life can change in the blink of an eye.

That’s certainly a fact residents of Fort McMurray, AB have come to realize in the wake of the recent and ongoing wildfires that devastated the community and impacted thousands.

“It’s not the house, it’s not the property, it’s not even the items we’ve lost – we’ve lost our community,” remarked Janice Pyke (née Svandrlik), a long-time Fort McMurray resident who was born and raised in Meadow Lake.

Pyke, along with her husband, Ron, owned their Fort McMurray home since the 1980s. They built a life in that home and in their community. Last week, they watched it all go up in smoke.

“Everything is gone,” Pyke continued. “I’ve seen photos of our street. The house, our skid-steer, our trailer, it’s all gone. I also had a whole bunch of antiques and I owned my own dog grooming business, but not anymore.”

The Pykes, who lived in the Beacon Hill area, were among the first Fort McMurray residents to be evacuated. They began the trek to Meadow Lake, not only because it’s Janice’s home town, but also because they own and have access to a house on Rialto Road.

“We were going to retire here one day, now we’ll just have to hurry our plans along a little,” Ron Pyke noted.

Their journey to Meadow Lake wasn’t without its share of strife either.

“We were about an hour out of town when our water pump went and we had to be towed back to Fort McMurray,” Janice Pyke said.

Trading their vehicle for an older car, the couple was finally able to make their way east.

“I have nothing but love for that old rust bucket now because it got us here safe and sound,” Pyke added. “I also have nothing but incredible praise and thankfulness for the people in this town. Everyone has been so kind – especially the Salvation Army, the Thrift Mission and the Door of Hope. People have even been offering us money, but I want any and all financial donations to go to the Red Cross in order to help everyone.”

Still, the Pykes have a rough road ahead.

“We’re constantly living in fear,” she said. “Whenever we hear a siren, it makes us think of the fires. All we can do is ask God to help us. We wanted to come back here one day, but it’s very hard to come back now. Right now we’re still going through the grieving process, but it ain’t easy.

Also planning to return to Meadow Lake this week is Rod Bear, a Flying Dust First Nation resident who worked as a heavy equipment operator in Fort McMurray.

“The night before the evacuation order came, I was working the night shift,” Bear said. “When the call to evacuate came around 1 p.m. May 3, I was still sleeping and didn’t wake up until 5:30 p.m. When I awoke, I looked at my phone and saw a bunch of text messages from people telling me to leave. By then, I had just enough time to grab my meds and my backpack and to get out.”

As he was departing the community, Bear said the flames were extremely close.

“I got in my truck and remained stuck in traffic for about three hours,” he noted.

With his gas tank running low, Bear eventually made it to a spot where he could pull over for the night.

“From where I was, I could hear propane tanks going off and vehicles exploding from the heat,” he said. “I stayed in a field for the night with a few other people, but the fire was still very close and it was very frightening.”

The next morning, Bear headed north to his work site where he stayed for couple of days before being transported via airplane to Edmonton.

“It’s really uncertain as to when I’ll be heading back to Fort McMurray,” he said. “They have no power, no water, no natural gas – they shut off everything. It could be weeks, it could be months. As for work, I’m not too sure what’s going to happen there either. There was fire in the area, and if it took everything out, there’s obviously no job to go back to.”

Bear has family in Meadow Lake and said he’s looking forward to seeing them and relaxing as much as he can while keeping his mind off the fires.

“For me, it was a life-changing experience,” he said. “The things I saw were very surreal – it was like I was in a movie. Right now I just need time to work out my thoughts.”

Meanwhile, numerous businesses, organizations and individuals throughout the Northwest continue to raise funds and provide other donations for the Fort McMurray fire victims. Among them are the people of La Loche, a community not unfamiliar with the danger wildfires can bring.

“CHPN Radio held an auction sale yesterday (May 9),” stated Leonard Montgrand, executive director of the La Loche Friendship Centre. “That’s about all our community has been able to do so far – just whatever we can to raise money to send to the Red Cross so the feds can match it.”

Montgrand went on to stress the importance of helping out, citing Fort McMurray’s close proximity to La Loche.

“We’re not very far from there,” he said. “We’ve had ashes and smoke from the fire here for the past three or four days. Thankfully the cold weather has really kicked it down a lot. In fact, we still have ice on our lakes while there are forest fires raging to the west. The whole thing is just weird.”

He also said a lot of people who live in La Loche and other local communities work in Fort McMurray, adding many of them have recently come home.

“We know what it’s like,” Montgrand added. “Last summer, we, along with the entire North, were evacuated because of forest fires. The Red Cross did a wonderful job, but I can only imagine how difficult the job must be in this situation considering almost 10 times the number of people have been evacuated in Alberta than were evacuated here. The positive thing is we pulled through and Fort Mac will pull through as well. This will make them stronger and allow them not to take anything for granted. We live in bush country and sometimes things like this happen. You just have to be prepared for it.”