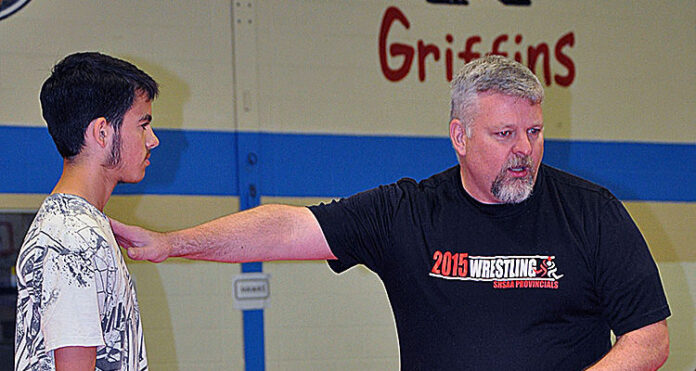 For two days this week, students at Gateway Elementary School in Meadow Lake had an opportunity to experience firsthand the sport of wrestling when Chris Brownrigg, coach of the Northern Pikes Wrestling Club, stopped by May 17 and 18 to host a special clinic.

“I’ve done something similar this year at both Jonas Samson Junior High and Carpenter High School,” Brownrigg explained. “Wrestling is a component of the phys ed syllabus, so essentially I was brought in to teach the students wrestling as part of their regular gym classes.”

Brownrigg described the clinic as an introduction to wresting.

“It allowed the kids a chance to get to know who I am, and – come fall – hopefully it will help attract more young people to the Northern Pikes,” he added. “It’s a win-win for everyone. The kids receive qualified instruction and we build a bit of a relationship.”

Last season, close to 40 youth were enrolled in the Northern Pikes club. As for the Gateway clinic, however, not all students took part. Brownrigg said an information sheet was sent home notifying parents about the clinic. If they chose not to have their child participate, they indicated as much on the form and returned it to the school.

“Some parents do have concerns because they perceive wrestling as a rough sport and think their child could get hurt,” he noted. “But, as we’ve done all year at the club level, we pair students based on their size, which does reduce the chance of injuries.”

He went on to say, although it’s not standard practice to teach wrestling at the elementary school level, at the same time he only taught them the very basics.

“We play a lot of warmup games, but I do teach them a few moves too because that provides them with a sense of achievement,” he said.

Gateway vice-principal Angela Ellis said any time they can introduce a new sport to the students, it’s a good thing.

“It broadens their experiences and also makes them aware of the wrestling club we have here in town,” she said.

Ellis also added, when young people have a chance to experience something in school, it tends to peak their interest in possibly pursuing it outside of school.

“And, the more active kids are, the better,” she said.