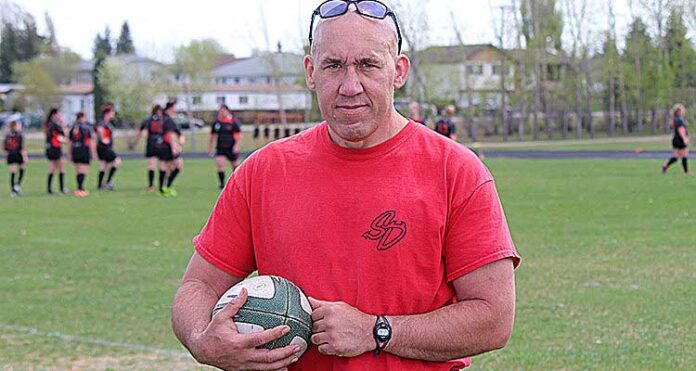 For three years now, Rufas Crawford has been looking to raise the profile of the sport of rugby in Meadow Lake. Recently, Rufas spoke with Northern Pride about the local SheDevils team, his background in rugby and life as a stay-at-home dad.

Q: Tell me more about the rugby tournament hosted by the Meadow Lake SheDevils on the weekend.
A: It was the northernmost rugby tournament ever held in Saskatchewan and, even though things didn’t go quite according to plan – we had one team drop out at the last minute – it was still a great weekend. The weather cooperated and the Fort McMurray fires laid off long enough that we didn’t have to play in the smoke. What really made it great, though, is the tournament marked the first time a lot of these girls had a chance to play in an actual game setting, and that’s huge.

Q: Why did you introduce rugby to Meadow Lake when you did?
A: Before coming here, I lived in Swift Current where I coached rugby for five or six years. When I moved to Meadow Lake about four years ago I missed it. I wanted to get a team going locally and, just by chance, ran into Audrey Park who now coaches the SheDevils with me. Her mother was actually visiting her at the time and, while they were out one day, spotted me wearing a rugby shirt. She approached me on behalf of her daughter because Audrey has played some high profile rugby in the past and was looking to become involved again here in Meadow Lake. It’s very nice to have a second coach who can help out.

Q: Why is there no boys team?
A: Everyone asks me that. Because rugby already has such an aura around it of being a boys sport and for being rough and tough, if I’d started a boys team first, it would be just like football. I might get two or three girls show an interest, but I’d never have had a girls team. I’ve always said, if I can get 30 girls who are committed to the sport, I would then look into forming a boys team. I know if I put a sign up at the school advertising a boys rugby team, I’d have a full team overnight. Ultimately, my goal is to have a girls team, a boys team, a junior team – kids of all ages playing rugby. But, I also have to be careful not to spread myself too thin. I don’t want to take anything away from one team just to get another one going.

Q: Could there be a boys team sooner rather than later though?
A: At one point this year, 28 girls came out to practice. I got a little nervous because I’m not quite ready for a boys team yet, but it will depend on what kind of support we get from the high school football program. In Saskatoon, we ran into a problem where football coaches didn’t want their guys playing rugby in case they injured themselves.

Q: Since forming the SheDevils, has interest in the sport grown?
A: It’s really grown, and I think that’s because of a couple of reasons. The girls who do come out have a really good time, especially on the different road trips we go on. We’ve been able to develop a lot of team bonding. Also, when I started the team, it involved introducing rugby to a community that knew very little about the sport and one that had a lot of misconceptions. Once the myths were dispelled, a lot of the kids who are a little more shy have started to come out. We also have no tryout policy. If 30 girls come out, we’ll form two teams. We don’t cut anyone.

Q: Tell me more about your background in the sport.
A: I became involved in rugby during a beer night fundraiser for the sport. I was recruited and never actually played my first rugby game until I was 30 years old. I grew up in Simpson, SK, which is south of Watrous. It’s a small town where you play hockey in the winter and street hockey in the summer. It’s just hockey, hockey, hockey all year round. Once I did play rugby, however, I instantly fell in love with all aspects of it – both on and off the field. The camaraderie is exceptional.

Q: Is it like that everywhere?
A: Pretty much. I could have only a dollar in my pocket, but if I have a pair of rugby cleats slung over my shoulder I could travel the world. You could show up to a rugby practice or a game in Australia and tell them you play the same sport in Saskatchewan and they’ll offer you the chance to either train or play with them. By the end of the night, you’ll be swapping stories and you’ll have a couch to sleep on before moving on to a new place and doing it all over again the next day. I don’t think you could say the same thing about any other sport.

Q: You also referee rugby, is that correct?
A: Yes. I played for a year in Mexico City. It wasn’t professional, but there were a lot of semi-pro guys there at the tail-end of their careers which definitely made it higher level rugby and allowed me to learn a lot of different styles. I played with enough guys to have picked up on a few things. At the time, there was a huge referee shortage, so I would play and later on I would go out and ref. I’m not much of a referee, but by the end of the seasons, I was being called up to referee road games and even had the opportunity to referee the first girls rugby game ever played in Mexico. I was in demand not for my skill level, but for my availability.

Q: How long did your career as a player last?
A: My rugby career was like lightning in a bottle and was the most fun I had for five years of my life. Later, I ended up in Swift Current which is rugby no man’s land, but I loved it so much that I instantly became involved again the first chance I could. My wife, Tanis, taught at the school there and told me about this new teacher from Winnipeg who, two days into the job, was talking about forming a girls rugby team. I called him up and we’ve been the best of friends ever since. My dream of playing senior men’s rugby is over, but I can still offer something from a coaching perspective.

Q: What brought you to Meadow Lake?
A: My wife. She taught in Swift Current for seven or eight years when she was presented with the opportunity to come up here and work as a coordinator with the Meadow Lake Tribal Council. From there, she moved into a superintendent role.

Q: And, what do you do for a living?
A: In Swift Current I had my own welding company and I worked in the oil field. But, we kind of agreed, once our first child reached the age of five, I’d be out of the oil patch and into a new career. We had three kids in four years, so when we came here my role completely changed. I went from being in the oil patch 90 hours per week to being a stay-at-home dad.

Q: What’s that been like?
A: It’s required a big adjustment. At first, I felt there were more important things I should be doing than washing dishes and sweeping the floor. But, now I’m really into helping with homework, making lunches and all that stuff. Between moves I was also able to go to university and earn my teaching certificate. I completed my internship at Carpenter High School when we first moved here and, in another year, all our kids will be in school full time, so I’ll have to grow up and decide what I want to do next. I’m pretty sure I’ll be involved in the school system somehow.

Q: Tell me more about your family.
A: Our son, Allandrex is eight, our daughter, Denzara is six and our youngest son, Zandre, is four.