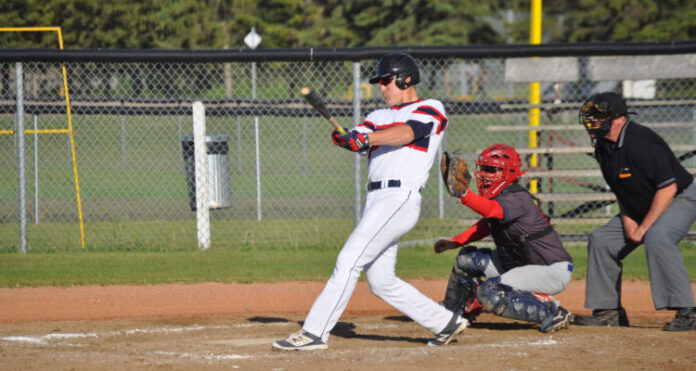 As the voice of the Meadow Lake Mill Town White Sox, Donna Winkler certainly knows her baseball.
“I grew up around baseball – my dad was a coach for many years and I had three brothers who also played,” Winkler explained. “I was at my first baseball tournament when I was 10 days old and, during the summer months, it’s been that way pretty much every weekend since.”

Winkler and her five sisters were also taught from a young age how to keep official score at baseball games, a job she was tasked with during her youth and one she stuck with when she grew up and had a family of her own.

“My husband, Glen, and I moved to Meadow Lake in 1990, but there was no minor baseball association of any kind back then – all they

offered here was softball,” Winkler said. “We went to the local recreation board to see if we could get something started, at least at the Bantam level, because that’s the age group our son, Quincy, was in at the time. Glen also coached for many years.”

The Winklers’ efforts helped launch what is today known as Meadow Lake Minor Baseball, an organization that features baseball for all age groups and which has achieved record numbers in terms of registration the last two years. They were also instrumental in the development of Diamond #1 (also known as Assman Field) in Lions Park and, today, Quincy Winkler is one of the Senior Sox’s top pitchers. And – in addition to her role as treasurer and her other behind-the-scenes responsibilities – Donna Winkler continues to be involved with the sport in the same way she got her start all those years ago.

“I still keep official score of the Sox home games, and I announce the games,” Winkler said. “I also watch a lot of baseball on TV, so I try to keep my announcing skills up that way too. I don’t call a whole lot of the game because I don’t think people are really there to hear me. But, it is nice for them to hear who is coming up to bat.”Although Winkler admits she should, she doesn’t put a lot of preparation time into calling each game. If provided with individual player stats, however, she did say she would be happy to include them in her commentary.

“It’s just something I love to do, plus the Sox are still a really big part of my family,” she said. “Quincy is there, of course, while (fellow player) Davin Hildebrand is my son-in-law. Also, until recently, I used to enjoy watching my nephew, Regan Beck, when he was part of the team. I love watching the boys compete and, as a mother, I still get nervous whenever Quincy is pitching.”

As for the team itself, the Sox currently sit atop the Smith Division with an 8-5 record and a .615 average. They split weekend road games, defeating the Midwest Expos 12-0 before falling 10-0 to the Lloydminster Twins. On Thursday, Meadow Lake defeated the
visiting Standard Hill Lakers 4-2, while last night (June 29) they were scheduled to meet the Mervin Flyers at home (results were unavailable at press time).

“We’re at a stage in the season where we’re going to have to start getting hot,” remarked Sox player and team manager Kevin Gerwing. “We won two out of our last three games and, with the loss to Lloydminster, I’m sure we can take away some positives and some negatives. We’re in great shape, are set up to win our division and, I believe, make a really good push during the playoffs.”