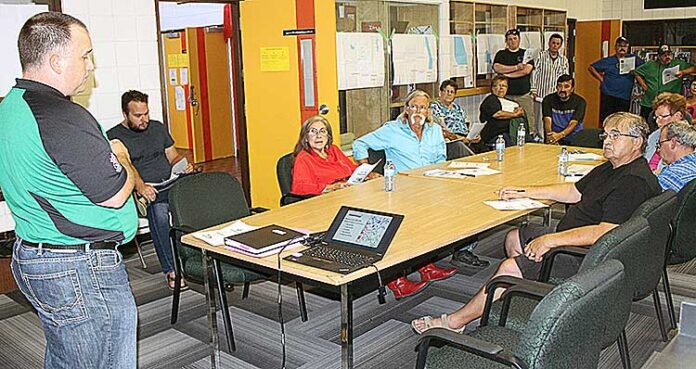 Details were revealed at a public meeting Aug. 13 at the village’s community hall where SaskEnergy business supervisor Jeff Schewaga invited residents to join the project. By Sept. 30, the company hopes 160 residential units are signed up in order to start work without delays.

If expansion occurs, it will begin at Meadow Lake Mechanical Pulp and run about 38 kilometres along Highway 55 and the public right-of-way. Another 14 kilometres of pipe will be installed throughout the village and a tracer wire will be added throughout the entire length. The company estimates the cost to be pegged at $3.4 million and they would like to start work next spring to have gas flowing by the fall of 2017.

“Based on our investment and the expected revenues we’ll receive over the next 20 years, a residential customer is responsible for $13,000,” Schewaga stated, adding businesses will pay $15,000 or more. “There are going to be some rural customers who want to tie into the system and their cost will be a minimum of $15,000 depending on how far away they are from the line.”

The 160 residential units required, however, can be reduced in number if larger facilities in Green Lake decide to sign up. Village mayor Ric Richardson said all Green Lake properties will be converted to natural gas, and he’s also heard from Saskatchewan Housing Corporation, which is interested in doing the same. While only 160 units are needed to commence work, SaskEnergy officials would like 255 on the system by 2027.

“I haven’t contacted the Northern Lights School Division, but the school (St. Pascal) is between 10-15 equivalent houses which, if they sign up, drops from 160 to 145,” Schewaga noted.

The school division recently converted its schools and main office in La Ronge and Air Ronge to natural gas after an expansion there started in 2009. Officials were expecting the conversion would cut the energy bill at those places in half. Throughout the North, Northern Lights schools use a mix of oil, propane and electricity for heat.
Richardson has faith the project will move ahead, stating there already seems to be enough interest. He said councillor Phane Ray is also willing to devote some of his personal time to explain the project or finance plan to anyone who wants to understand the process better.

“The biggest thing is convenience,” Richardson added. “I know of some people who run out of propane or heating oil and that won’t be an issue with natural gas. The cost savings compared to other heat sources will also be a factor looked at positively.”

According to SaskEnergy, for every loonie spent on natural gas, average customers pay the following using other fuels: electricity $5.14; fuel oil $4.68; propane $2.75.