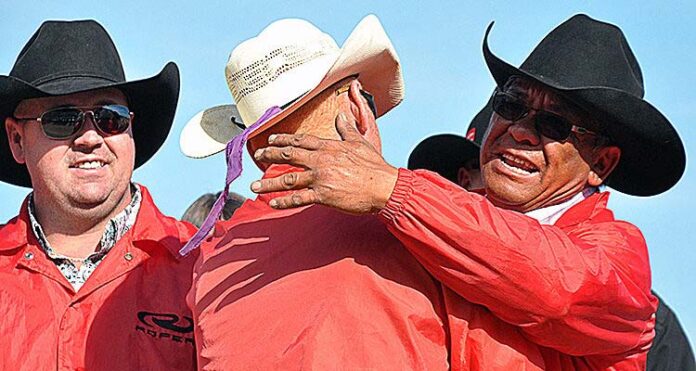 “It took me a few years, but I finally did it.”

In what proved to be a record-setting afternoon in Lloydminster, Ray Mitsuing of Loon Lake captured his seventh Canadian Professional Chuckwagon Association championship making him the most decorated driver in CPCA history and making up for a disappointing loss in last year’s final when a mishap in the championship heat took his wagon out of the dash.

“We’ve set a new standard with seven wins,” Mitsuing remarked. “To win seven Canadian championships is quite an accomplishment.”

“I had first pick so, after talking it over with my wife and the boys, I decided to take barrel number two because I felt the judging hadn’t been up to par on the first night when, from barrel one, I was given a lane penalty,” Mitsuing explained. “During the final heat, I waited until we rounded the track toward the finish. I saw Kris Molle drift wide and I took the hole.”

Mitsuing also credits his success to his outriders, Dale Mitsuing and Sandy McKenzie, admitting he wouldn’t be this year’s champion if it hadn’t been for their efforts to get the job done.

“I didn’t even have to look back with those two guys,” Mitsuing said. “Dale and Sandy did what they had to do, allowing me to do what I had to do.”

As much as he continues to bask in the glory of a seventh CPCA title, Mitsuing agreed the opportunity would not have happened if he would have stuck to his original plan to retire following last year’s Calgary Stampede. Ultimately, he changed his mind, however, and not only finished out the 2015 season, but came back this year to glorious results.

“What caused me to change my mind about retirement was the fact I got away from all the political, behind-the-scenes stuff,” he said. “When I stepped down as association president, I had less stress and could put all my focus on being a successful competitor. When spring training came around this year, the horses looked so good I knew I had to keep going. Also, having my son, Devin, back on the circuit this year also served as extra motivation for me.”

Now, with another season in the books, Mitsuing doesn’t appear to be slowing down any time soon.
“I’m staying home this weekend to take part in a fundraiser for a friend of ours who has cancer, but Thursday, Dale and I plan to fly to Vancouver to look for some new blood. We’ll head out there, talk to a few people and see if we can find some new horses to join the team.”

Mitsuing went on to thank his sponsor, the CPCA fans, as well as his wife, Josephine, and his entire family.

“The fans have been behind me all season and forever, the boys are always there to help out and Josephine puts up with a lot of BS all year long,” he said. “She’s the main backbone of this entire operation.”

For winning this year’s championship, Mitsuing was also the recipient of a 2016 GMC Sierra. But, he didn’t have the truck for long.

“I gave the truck to Dale,” he said. “He does a lot for us on the road and at home when I’m not around, so this is my way of repaying him. He deserves it.”