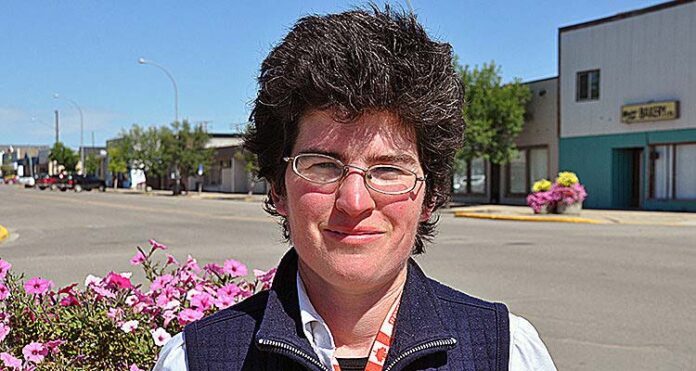 Originally from the United Kingdom, Jeanette McGlynn has enjoyed adapting to life in Saskatchewan’s northwest. Recently, Jeanette spoke with Northern Pride about what brought her to Canada, life on the farm and her love for travelling.

Q: Where are you from exactly?
A: I’m from Chesterfield, England.

Q: Whereabouts is that?
A: It’s in the midlands. Well, it’s classified as the north, but if you look at a map it’s sort of in the middle. Over there it would be a small town, but it’s twice as big as Meadow Lake.

Q: How long have you been here?
A: I first came in January 2013 as part of a farm exchange. I was supposed to stay a month, but I stayed a little bit longer. Then I came back, finally got a working holiday visa, and that’s why I’m here now. I’ve got a two-year visa to stay in Canada.

Q: What is it that makes Meadow Lake so special?
A: It’s the people who I’ve met, the farm I’m staying on (Bruce and Marilyn Meeds’). It’s difficult to explain, but I’d say it’s mostly the community.

Q: How did you come to be a part of that initial farm exchange?
A: I actually started travelling in 2010. It was mostly as a tourist at first and then working to get some more money. A little later on, I found this website called HelpX, through which you can write to people and ask if you can stay with them and help out with whatever work they need done around their place. I did that first in New Zealand and just carried on travelling that way because it seemed like such a good system. You could stay somewhere longer because you could afford to. The Meeds have a profile on this website, I wrote to them, we shared a few emails back-and-forth and that’s how I eventually came to be here.

Q: What kind of work did they have you do when you arrived?
A: I arrived here in winter, so there was a lot of chores. We fed the animals grain and hay every day, and there was a lot of chopping wood. It’s one of those things where there’s always a lot to do, but it’s not always the same. There is an hour or so that’s the same every day, but after that we could be doing anything. Some days we’d go to another ranch and help them out too. We got involved with branding and cattle drives.

Q: Were you familiar with this kind of work before?
A: It was pretty new to me. I hadn’t done much farming at all. I’d done a bit of general gardening or looking after small animals. The biggest thing I’d ever looked after was a goat. But, I really do enjoy the work. If I ever manage to get rid of the travelling bug and settle down, I’d like to have a small farm or ranch.

Q: Was the Saskatchewan winter weather a huge shock to the system?
A: It’s not as cold where I come from, but if we get to below zero it feels a lot colder than here. It’s a dry cold here, which is actually nicer. You can dress up against it, which you can’t do in England.

Q: You must have met several people from different countries during your stay here.
A: Yes, people from all over. There are a lot of Europeans staying here, so I’ve met a lot of French and German visitors, but also people from Denmark and The Netherlands.

Q: Aside from helping out at the farm, what else do you do?
A: I work at Extra Foods as a cashier. People who come through the tills will likely see me. I also work part-time at the Stockyards where I help with penning the animals on sale days, and with pre-sorting them the day before the sale.

Q: Is your job at Extra Foods challenging because of the Canadian monetary system?
A: I’m fairly familiar with the money now. When I first started it was like driving on the right side of the road, it took some getting used to. The money wasn’t too bad. It’s learning all the vegetable codes and also names. The Canadian English and the British English sometimes have different names for things, different brands – I don’t always know what people are talking about. And then the accent can be a bit of a challenge too.

Q: Do Canadians have what you’d consider an accent?
A: Not really. I know you sound different from me, but I’m kind of used to it. Whenever I go somewhere new, it stands out, but you eventually grow accustomed to it.

Q: Where else did you travel before coming here?
A: For two years, I went all around New Zealand, I travelled throughout Australia for another year, and I’ve had a chance to visit the Scandinavian countries, as well as South Africa and Japan.

Q: What’s the agriculture world like in those places compared to Saskatchewan?
A: I couldn’t really compare it justly because I wasn’t working with animals so much in New Zealand and Australia. New Zealand’s biggest commodity is dairy, but Australia’s is varied because it’s larger and has a wider climate range. They’ve got huge sheep and cattle ranches, as well as rainforest environments with the bananas and such. Where I’m from, it’s mainly sheep.

Q: Earlier this summer, I saw you compete at the rodeo in Meadow Lake (in the local ladies steer riding event). How did you get talked into doing that?
A: I actually volunteered for that. Last year, some of the helpers who were at Bruce and Marilyn’s did the rodeo. One of the girls was here again this year, we were talking about it and we said “sure, why not?” It was just for fun.

Q: For someone who’d never done it before, what was going through your mind as you’re in the chute waiting to go out there?
A: It was pretty overwhelming because we were trying to run around and get all the gear, then we got kitted up and it was almost time to go. We weren’t quite sure what was happening. I got on the cow, sat there, your mind goes almost blank because there’s so much information going through.

Q: Were you scared you might get hurt?
A: Not at the time. Your adrenaline is pumped up so much. I can see why the bull riders do it. I remember just holding on thinking I should be doing this, then two bucks later I’m picking myself up of the floor. I’d definitely do it again next year.

Q: How long do you plan on staying in the area?
A: I have one more year left. I’ll probably mostly stay in this area, but I do want to do more travelling throughout Canada – more so as a holiday, however.

Q: Do you have any words of wisdom you like to share with others?
A: Things that are meant to be are meant to be. Just go with it because you never know where it will lead you. Don’t be scared, jump in with two feet and see where you end up.