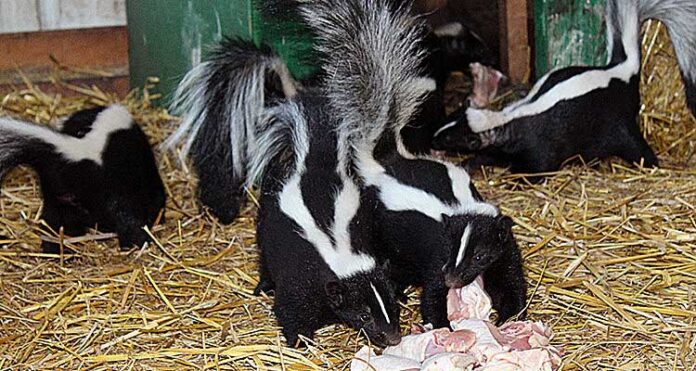 The stench of skunks could be more prevalent this year due to higher than normal numbers.

Healing Haven Wildlife Rescue near Dorintosh has witnessed a surge in orphaned skunks as more people surrender them into care. Rescue operator Mark Dallyn said, so far, 18 skunks have arrived at the shelter compared to a single one in 2015. He believes their numbers are rising because he’s never had that many before at one time.

“I’ve mainly been picking them up,” Dallyn stated. “Most of the time, the mother has been shot or hit on the road. A couple have been found by themselves without the mother or the rest of the family around at all.”

Dallyn said, because the Ministry of Environment doesn’t allow him to use live traps to move them, he’s been giving concerned residents advice on how to move them themselves. He suggests putting a bright light where the skunks are living and also play music loudly. He said it’s the most humane way of dealing with skunks considering the use of traps could result in more orphans.

Dallyn went on to say, as long as a person doesn’t make sudden movements near a skunk, they should be safe. He also advises people to keep their distance because skunks are known to be a carrier of many diseases and parasites.

“People shouldn’t try keeping orphaned skunks – there’s been a lot of that this year,” Dallyn remarked. “They don’t make good pets. They are wild animals and are known to carry rabies, and you never know which ones are carrying it. There’s no way to know unless the brain is tested.”

The orphaned skunks are responding well to rehabilitation and the method used to do so keeps them relatively wild. Dallyn has enjoyed their company, noting skunks are smart animals.

The surge of skunks in the countryside hasn’t left Meadow Lake immune. City workers have dispatched two traps in the last two months, which have caught two skunks. Meadow Lake resident Francie Thomas is among those who have requested a trap after a skunk and its litter made a home under a shed next door.

“The mom will walk through the yard with her babies coming behind her and our dogs go bananas,” she remarked. “She’s not spraying or anything, but they did put out a trap. She’s not stupid, though, because she walked through to the other end.”

Thomas, however, is concerned about skunks living so close because she believes a family pet died due to contact with them. Her dog died due to distemper in 2015 and she was told skunks likely passed the disease. She also feels skunks may pose a threat to children.