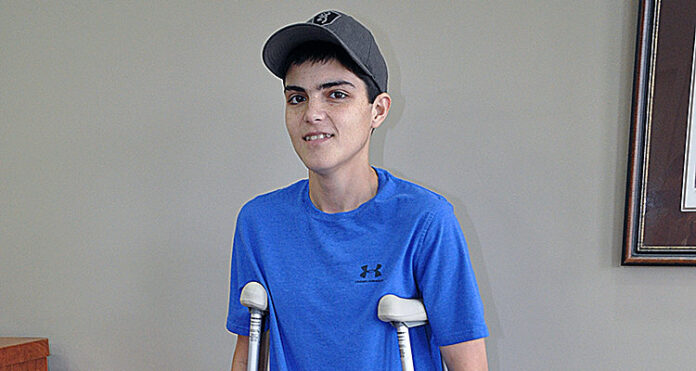 Juvenile Arthritis Awareness Month may be over for another year, but at least one Meadow Lake area mother still wants people to understand the impact the disease can have.

Kathy Borschowa’s 17-year-old son, Joe, recently underwent hip replacement surgery at the Saskatoon City Hospital in an effort to alleviate the constant pain he’s in as a result of the arthritis that’s gripped his body for years.

“He’s had juvenile rheumatoid arthritis since he was a baby – he was diagnosed when he was 15 months old, and was just recently diagnosed with avascular necrosis (decaying bone tissue due to a lack of blood supply),” Borschowa said. “This means he has to eventually have both his hips replaced.”

Last month, Joe’s left hip (the worse of the two) was replaced with a titanium one, while a similar procedure to replace his right will happen within the next two years.
Unlike common aches and pains associated with arthritis, children with juvenile rheumatoid arthritis suffer from various auto-immune forms of the condition. Their body’s immune system is attacking their joints, causing swelling, stiffness and permanent damage. If left untreated, it can result in loss of mobility, blindness and even death.

“After the surgery, I was sore, hungry and tired,” Joe explained. “I’m still sore, but it’s not arthritis pain – it’s a different kind of pain. After so many years, I’m used to the pain, though. Now, it’s just a matter of walking some more with my new hip and getting used to that.”

His mother, however, said it’s somewhat devastating to think of everything Joe has endured throughout his lifetime.

“You have these dreams for your kids, but he couldn’t be like all the other kids growing up,” Borschowa said. “We had to watch him more closely, and he couldn’t take part in any sports, but he’s always loved hunting and fishing. Those are his passions – he spends a great amount of time doing that. In fact, he wants to be a hunting guide when he’s older and, as part of his stay at the hospital, he is going to receive a wish from the Children’s Wish Foundation. It’s been postponed until next year, but he wants to go hunting and fishing in the Yukon with (professional game outfitter and TV host) Jim Shockey.”

Joe, however, said he just wants to get “back out there.”

“I hope to get a deer this season,” he added.

His mother, meanwhile, stressed the importance of increasing the profile of juvenile rheumatoid arthritis.

“We just want to let people know this is a disease that can affect anybody, no matter their age, and if someone believes they may have arthritis, to get checked out sooner rather than later,” Borschowa said. A lot of people don’t understand arthritis – they view arthritis as being an old person’s disease. The truth is it can affect anybody.”