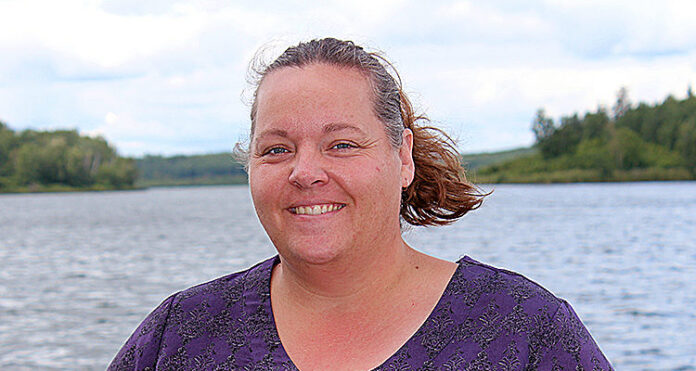 Loon Lake area resident Carrie Arlett is used to watching events happen through a camera lens. Recently, Carrie spoke with Northern Pride about photography, her commute to work and why she likes living in the Northwest.

Q: Tell me about your latest photography gig in Saskatoon?
A: I barrel raced when I was young and got back in it through photography. This year, I was hired to photograph the Saskatchewan Barrel Racing Association final in Saskatoon, which was held last week. I put a bid in for it and won – the regular photographer had stepped down.

Q: How did the barrel racing job work?
A: Because it was indoors, I had to take extra lighting with me. It’s quite limited indoors because so much has to be set up to light up the horses. They come in and go to one of the barrels, and I’m usually at the second barrel. I had one flash set up that concentrates on the barrel. It’s a matter of timing because, with the flash, I can only take one or two shots and I can’t just machine gun it (quick consecutive shots). It’s about timing and it was a bit of a problem to make the lights work properly. Not every photo worked out because the light didn’t reach them or they were thrown ahead or the horse would stumble.

Q: What did it mean for you to win the bid?
A: It’s a big step up because it involved the whole province. There are 200 open riders, so it’s a lot of exposure. It came with a lot of headaches as well because some things don’t work or equipment fails. It’s a lot of pressure, but it’s good.

Q: Do you hope to do more work like that?
A: Yes. I’ll keep doing different events like barrel racing and cutting – that’s what I like to do. I get to leave for a couple days and talk to the people I’ve made friendships with. Finals was a big event for me this year, but I’ve also done a couple of the local barrel racing jackpots – I can set up extra cameras and the gear I have, and they don’t seem to mind. They’re a good group of ladies.

Q: Tell me about your photography business.
A: I prefer to take action-packed photos. My favourite is horse-cutting – when cattle are cut (out of the group) in an arena. That’s my favourite to do because the horses are digging deep. I also take chuckwagon and landscape photos – I do it all. I do family portraits and grad sessions, but there’s also a lot of other photographers around and that’s what they like to do. So, I don’t push that side of photography. I like to sit back, take in all the action and do my thing. I’m not a poser-type photographer.

Q: Where did the name Just Enjoy Photography come from?
A: It took a while to come up with it because I wanted people to know I don’t want to be a specific photographer for one thing. I enjoy all aspects of it. It was different and let people know I like to try new things.

Q: What are some tips for taking a good photo?
A: Practice, practice, practice. Don’t worry about getting an expensive camera off-the-bat. People should take a couple lessons, try new things and ask questions from people who do photography. There’s no such thing as a stupid question because we all need to keep learning.

Q: How did you get into photography?
A: When I was about 12 years old, I remember running back into the house and grabbing my camera to take a photo of a sunset. It was from then on. There are so many beautiful things in this world I want to take pictures of. I started with a basic camera and moved my way up. It’s been a lifelong getaway for me. I can go, take pictures and relax. I like going for a walk to take pictures. It’s my calming time.

Q: Are there photos you are proud of?
A: Narrowing it down to one or two is hard. I do have a couple on my walls. One is of a storm that was coming in from Lloydminster. I looked out the rearview mirror of my truck – and I usually have a camera with me – and the storm was rolling in and there were canola fields on a hill. The way it came in was just huge and I loved it. Another photo that comes to mind is of a chest of a horse. It’s just a guy riding around in an arena, but he has all the reins and ropes on his horse. They’re both just striking photos and they’re my favourites.

Q: Have you ever submitted your work into contests?
A: I have. I used to enter quite a few contests with places like Canada Tourism, Saskatchewan Tourism and The Western Producer for calendars and those type of things. I never actually won anything which was OK, but at the time when I was learning, it made me keep thinking what I was doing wrong. You have to get over that, though. It’s like if I enjoy it, great, and if others don’t, that’s OK. You can’t let stuff like that be discouraging, you just have to keep going.

Q: Do you work outside of photography?
A: I work at Jonas Samson Junior High School as a library technician. I’ve been there for 11 years. There, I work in the library and get the books ready for the kids. I also interact with the kids and work with the teachers. I do some of the tech stuff for them. I really enjoy interacting with the kids. I lead a photo club with them from January to June and teach them skills like the rule of thirds and how to read light. I really enjoy that part of my job because I get to pass on the knowledge I have. At the same time, I’m also learning and they show me different ways to look at things.

Q: Where are you from?
A: I was born and raised in Maidstone, SK. I moved to Loon Lake in 1996 and got married to my husband, Cory Arlett. We have a small farm with a few head of cattle and it has some pasture and hay land. He works off the farm a little bit and I’m at the school. It’s going good at the farm so far, we got some of the hay off without any rain, but there’s challenges every year. If you ask any farmer, there’s always something going on that’s a challenge.

Q: What’s your favourite part of living in the Northwest?
A: The rugged beauty we have. Between the lakes, forests, vegetation and wildlife – it’s beautiful. Where I live, we’ve had foxes, bears and deer in our yard. I can go outside and do whatever I have to do and it’s quiet.

Q: What are your hobbies?
A: People say I’m really creative. I enjoy painting and sometimes I help my dad make metal signs. I do the design for metal fabrication on big signs. He’ll call me and say he has a client and what they want, then I’ll do the design while he does the cutting and painting. There’s always some sort of creative thing going on.

Q: What’s the commute to Meadow Lake like?
A: Driving every day isn’t too bad because it’s a little bit of downtime in the morning. After school, it’s neat because I’m already in town so I can take pictures of football or volleyball when school is out. It works alright that I’m in Meadow Lake then, afterward, I can do whatever. Driving isn’t too bad unless it’s a day I have to drive 40 kilometres per hour because of the weather. Those days it’s better to stay home. Driving on those days doesn’t bother me, it’s the other people on the highway who make me nervous. Sometimes I wait for the highway truck to go out and my employer is understanding when I can’t come in or I’m an hour late.