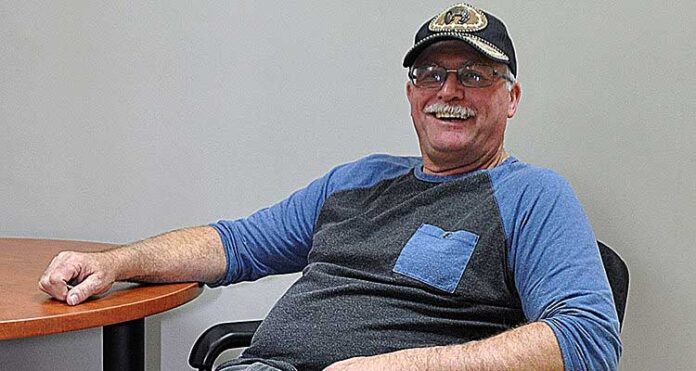 Tim McKay is looking forward to serving the RM of Meadow Lake as the community’s new reeve. First, however, Tim sat down with Northern Pride to discuss the recent election, life in Dorintosh and the importance of family.

Q: What made you decide to run in this year’s municipal election?
A: In talking with different people, they were very frustrated with the way communication was coming out of the RM. So, I though, if I ran, there’s a possibility I could change that by figuring out better ways of communicating with the ratepayers. It’s their money we’re spending, so they should have a right to know how we’re spending it.

Q: Did you put a lot of thought into running or was it more of a spur of the moment decision?
A: I probably thought about it for a good month-and-a-half before I put my name forward. It was a long, drawn out thought process.

Q: What was your initial reaction to discovering you were the successful candidate?
A: Initially, I was somewhat surprised at the difference in the vote (McKay received 296 while incumbent reeve Roger Zuchotzki received 159). I thought I had a chance of winning, but I also thought the result would be a lot closer than what it was.

Q: What sort of method did you use to secure votes during the  election campaign?
A: Mainly, I talked to people one-on-one. I thought, if I talked to people one-on-one, if they like what they hear from me, they would tell their friends and they’d tell their friends. And, if they didn’t like what I had to say, well that’s that. I didn’t advertise because I feel, if you’re asking a person face-to-face for support, they’ll either tell you yes or they’ll tell you no and you’ll know exactly where you stand.

Q: Are there any other issues you’d like to address during your time in office?
A: I haven’t got any specific projects in mind, but I would like to see how it’s set up for the new Northland Pioneers Lodge, as well as the new RM office. I want to see what agreements are in place and just how everything is working. That’s one of the main things I heard leading up to the election. In terms of the new RM office, a lot of people weren’t pleased with how that was coming about. They’ve heard it’s coming, but don’t really know a lot about it.

Q: Based on what you do know so far, do you feel the new RM office is something that could benefit the community?
A: At this point in time, I don’t have very much knowledge on it. I haven’t followed up yet to see what’s what. After I’m sworn in Nov. 7, I can look into it more and see how it’s set up and find out what the reasoning for it is. Is the old building still in good enough shape to be used yet? Is it not in shape? Has the RM outgrown the space? Does it need more space to work in and to secure the information they have on ratepayers considering the way Privacy Acts are now? There are a lot of things people need to know before they can really give a definite yes, no or comment on it.

Q: If a new building is indeed necessary, would it be nice to see it located in the actual RM opposed to the city?
A: There again, a person would have to look at what the cost would be compared to the city and the RM. Where is it going to be the best return for the ratepayers? That’s the main thing. If it costs an extra $100,000 to build it in the RM opposed to the city, why would you do it that way? And, if it’s going to cost an extra $100,000 to build in the city than the RM, why wouldn’t you build it in the RM? The location doesn’t matter so much compared to what’s most feasible.

Q: What are you looking forward to most in terms of working with the other members of council?
A: I’m looking forward to the fact I think it’s going to be a fairly exciting time. For me, it will be a big learning curve. It’s not like I haven’t worked for groups of people before or in leadership roles, but every organization operates a little bit differently. You have to learn the ins and outs of that. The councillors, for the most part, are very experienced. They know what’s going on in their areas and anybody in a leadership role has to rely on the people who are with him.

Q: How do you plan to approach continued relationship development with neighbouring communities?
A: I hope to continue developing the relationships in place now and see if there are ways we can better work together on projects. There’s always room for improvement. We’ll talk with the representatives from Meadow Lake and Flying Dust First Nation, and we’ll hear what they have to say, and work together to figure out what’s best for all the communities, not just one.

Q: I understand you were born and raised in the area.
A: I was born in 1956 in the old hospital in Meadow Lake, which people called the Old Barn. I spent all my life in Dorintosh and, in fact, I still live on the farm my dad homesteaded in 1932.

Q: How have things on the farm been going considering the early winter weather we experienced?
A: It’s still not over – it’s still an early winter. It’s been a little tense and a little frustrating. I’ve been around for 60 years and I can’t ever remember snowfall on Oct. 6 that stopped us from farming. When I was young, all the old farmers would say you get a lot more combining done in October than you ever did in September. Well, this year we got just about zero done in October. It’s kind of a frustrating situation.

Q: Dorintosh is fairly tight-knit, is it not?
A: Life in Dorintosh is great. I’d never live anywhere else. I’ve worked all over Alberta and B.C., but always knew Dorintosh as home. I bought my first farmland in 1978 – it’s an enjoyable life. It’s like anywhere else, it’s what you make it. If you get involved and help the community, the community returns the favour.

Q: Tell me about your family.
A: My wife, Carol, and I have been married 30 years. She’s originally from Makwa and, together, we have three sons. Kristoffer works in B.C. with a helicopter company, Joseph is a pilot in the air force – he flies helicopters – and our youngest son, John, has a journeyman in scaffolding and he helps me farm.

Q: You took over the farm from your father. Do you plan to one day pass it down to John?
A: Currently that’s the plan. Family is very important. Without family you really don’t have anything.

Q: What’s the greatest advice you’ve ever received?
A: Never get too excited about any situation because it will change. No matter how bleak things look, give it a few weeks and it will look better.