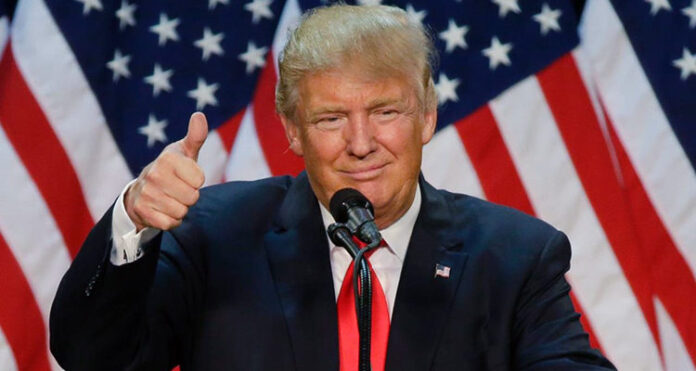 The American people have spoken.

And, while there’s still much concern and more than a little uncertainty in some parts of the world following Donald Trump’s victory in the recent American presidential election, officials north of the border – particularly in Saskatchewan – are remaining optimistic.

“Voters made their decision and it is what it is,” remarked Meadow Lake MLA Jeremy Harrison. “As far as we’re concerned, there are two important points to address as it relates to our economic future – trade issues and energy issues.”

Harrison – whose portfolio currently includes trade, tourism, innovation and immigration, as well as economy, the Global Transportation Hub and the Saskatchewan Liquor and Gaming Authority – said a Trump administration could be good news for the province’s energy sector, as it could finally lead to the approval of the controversial Keystone XL pipeline.

“The physical pipeline itself is made in Regina, so approval of Keystone XL would be very important in terms of creating jobs right here in Saskatchewan,” Harrison said. “And, the fact we’d be able to get our energy to tidewater is also a very positive thing.”

The Keystone pipeline is an oil pipeline system in Canada and the United States. Commissioned in 2010, it runs from the Western Canadian Sedimentary Basin in Alberta to refineries in Illinois and Texas, and also to oil tank farms and an oil pipeline distribution centre in Cushing, Oklahoma. Greater attention was placed on the pipeline when a planned fourth phase, Keystone XL, attracted growing environmental protest and became a symbol of the battle over climate change and fossil fuels. In 2015, it was rejected by President Barack Obama.

“Canada must now work with the new president in the best interests of both our great countries,” noted Premier Brad Wall. “President-elect Trump has made some election promises that could be positive for Canada, and others that are concerning. He has indicated his support for the Keystone XL pipeline, and with Republican majorities in both the House and Senate, I am hopeful that this important project will move ahead quickly.”

On the other hand, Wall hopes Trump reconsiders his plan to end the North American Free Trade Agreement (NAFTA).
“I would urge Prime Minister Trudeau and our federal government to reach out to the new administration as soon as possible on these and other issues of importance to our two countries,” he said.

Harrison agreed, but doesn’t believe Canada has as much to worry about as some people think.

“The trade front is more concerning,” he stated. “While on the campaign trail, president-elect Trump said he was committed to renegotiating NAFTA. I don’t think that was necessarily directed at Canada, but the federal government will need to address this quickly to ensure trade with the U.S. is protected.”

Much like former Quebec premier Jean Charest told reporters recently, Harrison believes there are opportunities for Canada if Trump sticks to his protectionist promises, especially if the Trans-Pacific Partnership (TPP) falls through.
“This could position Canada very well,” he added.

On the topic of immigration, Harrison described comments about moving to Canada made by Americans opposed to a Trump presidency as “silly.”

“A lot of people are saying they’ll move to Canada, but it’s not that simple,” he said. “People from other countries can’t just up and move to Canada. There’s a process that must be followed and it takes time. Besides, I think a lot of those comments are just talk and rhetoric.”

One American who did move to Canada but not because of Donald Trump, is Meadow Lake resident Heather Getz. Originally from Kentucky, she’s lived in Saskatchewan for five years.

“This was definitely the most intense election I’ve ever seen and it definitely created a divide between people in the United States,” Getz explained.

Getz, who is still allowed to vote in spite of living outside her home country, chose not to Nov. 8. But, she said it wasn’t because she didn’t want to.

“I thought I had to visit the consulate in Calgary in order to do so, but I later discovered I could have faxed my vote in,” she confirmed. “That’s all on me because I didn’t do my homework. Had I known, I would have voted.”
Getz also revealed she would have voted for Trump.

“Firstly, I’m from the south and come from a fairly strong Republican background,” she said. “That doesn’t mean I always vote for the party, but I like how Trump is a big supporter of the U.S. military. My dad is a veteran, as were both my grandfathers.”