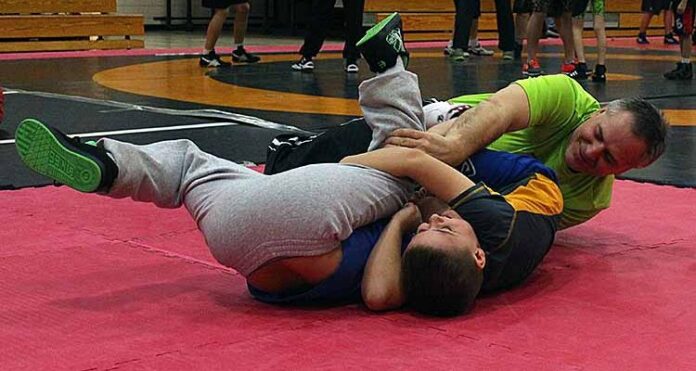 “It’s a good number this year and I’m happy with how many people came out,” said local wrestling coach Jason Guenther of the close to 40 kids who registered. “I was disappointed Dillon and Prince Albert weren’t able to come, but we never know exactly who is going to make it to these things.”

The development camp was held Nov. 26 at Carpenter High School and included Northern Pikes wrestlers, as well as others from North Battleford and Wilkie. Participants were split in two group depending on experience with those with more than two years of training placed in the advanced grouping.

While the group for beginners largely focused on the basics, Guenther stated the more seasoned group studied new moves and techniques. He added, an emphasis was also placed on how to win competitions and how to get out of attacks and counterattacks.

Guenther went on to say athletes also benefitted from having a new coach from Elrose leading the clinic. He said different coaches are able to provide an insight into what wrestling athletes might not otherwise gain.

“It’s always good to have different coaches come and show techniques in a different way and manner,” Guenther commented. “It helps the wrestlers learn. When you get the same thing over and over from the local coaches, you welcome some fresh ideas.”

The camp is also the only wrestling clinic held in the Northwest. Guenther said Saskatoon, Regina and Moose Jaw usually host camps of their own, but they’re later in the year.

Guenther said he has high hopes for the season. The wrestling program in Meadow Lake began in October and ends in April, and Guenther is looking forward to a tournament this weekend in Wetaskiwin, AB.

“In the early tournaments, we try and see what our athletes are doing,” he said. “We focus on their strengths and weaknesses and we take it back to practice.”

Logan Boser has been with the Northern Pikes Wrestling Club for three years and has never missed a camp. Currently in Grade 10, he said it’s beneficial because of the amount of wrestlers it attracts.

“People come from all over and we get new coaches who teach us new moves,” Boser noted. “Since I’m bigger and stronger than most people, I’m able to challenge myself more and push myself farther than I go in other sports.”