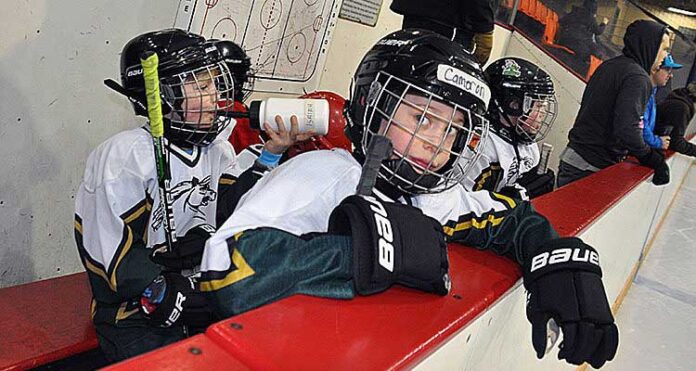 The action remains both fast and furious at rinks throughout the Northwest as the 2016-17 Meadow Lake Minor Hockey season inches ever so closely to playoffs.

“We got started in September and things will soon begin to wrap up,” explained Meadow Lake Minor Hockey president Richard Temple. “Playoffs begin in mid-February and the season usually finishes by the end of that month. It’s a long season, but I believe that’s what makes our teams so good. The kids spend a lot of time together – they become friends and, for the most part, play alongside the same kids each and every year.”

While how many championships local teams will earn this season remains to be seen, Temple said it’s already been a successful outing for the association as a whole.

“In terms of registration, things are looking up,” he said. “We have an additional 60 kids or so, bumping our overall number to above the 300 mark. We even have a couple of extra teams and a lot more kids signed up for Initiation hockey. Makwa Sahgaiehcan First Nation didn’t have any ice this year, so a lot of those kids also joined Meadow Lake Minor Hockey. That helped our numbers as well.”

This year, the association boasts six divisions. In the Initiation (formerly Pre-Novice) category, there are six teams including the Cowboys, Mini Broncos, Rockets, Stars, Muskrats and Oilers.

There are four teams in the Novice division including the Mighty Ducks with a current record of 3-5, the Mavericks have a 7-1 record, the Legends are 8-0 and the Sharks have five wins and three losses.

In the Atom division, there are three Meadow Lake squads. The Manglers have a 10-3 record so far, while the Mustangs sit at 8-4 and the Snipers have a 12-0 record.

There are also three Peewee teams from Meadow Lake. The Stampeders have a record of 10-5-1, while standings indicate the Outlawz have a 15-8-1 record and the Broncos sit at 8-6-2.
In the Bantam division, the Meadow Lake Stampeders have an 8-7-1 record and the Warriors have nine wins, five losses and three overtime losses. Also, the Midget Colts currently have a record of 1-12-1.

The aforementioned teams all compete in the STEP League, while the Meadow Lake Midget AA Stampeders – who currently have a record of 8-13-1-1 – compete in the Centre Four Hockey League where they’re ranked 12th overall. The Midget AA Female team from Meadow Lake, meanwhile, competes in the North Sask Female Hockey League (NSFHL) and currently sits sixth with a record of 3-17.

“Everything is going well,” Temple reiterated. “Not only do we have more kids this year, we’re right full at the Midget and Bantam levels. Hockey definitely continues to be popular in Meadow Lake and the surrounding area.”

Once things are all said and done on the ice, the association will officially wrap things up with its awards banquet March 14 at the Meadow Lake Civic Centre. Following that, an annual general meeting will be held later this year at which time new executive members will be determined.

“In the meantime, I want to thank the many volunteers, parents and grandparents who help out each and every year,” Temple said. “These are the people who make the minor hockey world go ‘round for sure.”