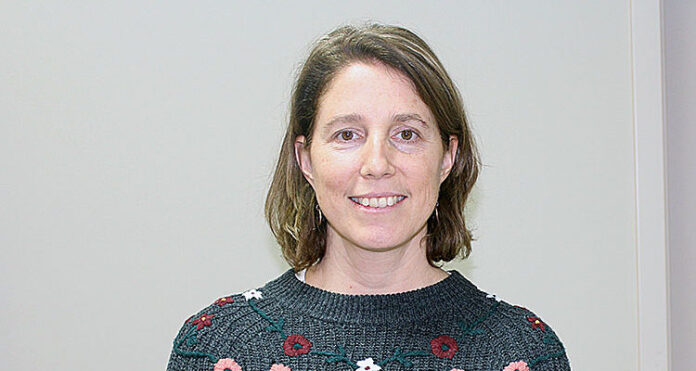 A Manta Ray Swim Club coach for the past seven years, Tammy Shakotko has a long history in the sport. Recently, she spoke to Northern Pride about the club’s recent Skills and Thrills Fun Meet, her love for swimming, her career as a dietician and her family’s bee keeping hobby.

Q: Tell me about the swim club’s recent event.
A: It’s meant to build confidence and skill with all of our athletes. They practiced some skills they’ve been learning that are important throughout their different levels of swimming. At the end, they practice racing using those skills. This year, a group from Cold Lake came out so we had about 48 swimmers. That’s a pretty big group of kids to have at the pool here in Meadow Lake.

Q: Is this an annual event?
A: We have done a meet like this many years in a row. It’s not a sanctioned one because it’s designed to provide an opportunity for our younger swimmers who aren’t competitive. The kids who aren’t competitive, they don’t travel often for swim meets, so they don’t have a lot of experience. So, everything they learn in their training, it gives them an opportunity to apply it. We try to host something that’s not too long of a day and is mostly focused on having fun.

Q: How long have you been involved with the swim club?
A: I’ve been a coach with the Manta Rays for seven years, but I was also a swimmer when I was younger. I’ve been involved in swimming in one way or another since I was 10 years old. Coaching has been enjoyable. Some of the older kids started when they were six or seven years old, so we’ve had a chance to see them develop from young to more mature athletes. It’s fun to coach and watch that throughout the years. We have about five coaches in our club and they teach different levels of swimmers. As they progress, they move from one level to another.

Q: Why have you been involved in swimming for so many years?
A: When I was younger I had a teacher who had been an Olympic swimmer. She started a club in our community at the time and our whole family was interested in it. I joined and, when we moved to another community, it was just a natural connection to look for a swim club and get involved again. It’s just been a nice way to train as an athlete and get to know other kids when I was younger. I also always enjoyed competing and training, so I just kept going. I moved here in 2001, but didn’t start coaching until 2010. We had a club at the time, but we had other coaches involved. When I got involved, I knew my kids were coming up and I wanted to contribute. I feel like I’ve taken away something from clubs all my life and learned a lot from coaches and I want to give it back.

Q: How far did you go in swimming?
A: I swam with the University of Saskatchewan while I was studying. I never really competed much there, but that’s where I did the most intense training I ever did. I really enjoyed swimming at that level, but at the same time, I wasn’t training fully – I was only training in the mornings. Swimmers can train up to 10-15 hours per week, but at the U of S, I was mostly focused on classes.

Q:What did you study?
A: I’m a dietician, so I’ve got a bachelor of science in nutrition. I swam for about two years while I was at university and now I work for the Meadow Lake Tribal Council. I do a little bit of sport nutrition work as well. I’ve had an opportunity to do some workshops on the subject with some of the provincial swim camps. I enjoy mixing my swimming knowledge with my nutrition knowledge.

Q: What does your job involve?
A: I work part-time and I mostly provide anything to do with nutrition knowledge. If someone has been diagnosed with a chronic disease, then I would find out what nutrition information might be useful for them. I work with pregnant and breastfeeding women to teach them how to eat healthy during their pregnancy. Sometimes we work in the schools to let kids know what’s healthy to eat. There are nine bands with MLTC, so we also travel a lot.

Q: What’s the biggest obstacle to eating healthy?
A: Cooking and sitting down as a family to eat or some of the things that provide opportunities for people to eat well. We promote eating a lot of fruits and vegetables along with a balanced diet. Busy schedules make it difficult for people. They need to find the time to shop, cook and then eat together. We’re all pretty busy nowadays, so sometimes you have to work really hard to make a meal from scratch when you’re busy.

Q: I understand you now live in the country?
A: We moved out of Meadow Lake to an acreage about three years ago and we love it. We have two horses, two dogs, two cats and we keep bees. We work with the horses a little bit. Our family rides them. We’re not competitive riders, but we sure enjoy the horses and learning about them. Our family started learning about riding in the last four years or so. I didn’t grow up with horses, so we had a lot of people help us. I did a lot of research and asked a lot of questions. If someone wants to know more about it, they should read about it and connect with people who are doing it and they can help you learn as you go.

Q: Tell me more about the bees.
A: My husband’s (Jesse Shakotko) family has kept bees before and I always thought keeping bees was really interesting. So, when we moved to the acreage, keeping bees was the first thing we decided to get into. We bought a hive and started learning from my father-in-law and he taught us a lot. Now we have three hives and we have to keep learning because it’s quite technical as well. We eat all of our honey and it’s fun to share honey with family and friends.

Q: What is the process?
A: Inside the hive, there are thousands of bees and they gather nectar and store it in the honeycombs. They fly out and find a source of nectar nearby, then bring it back to the hive and store it. Once it’s all capped – usually by the end of July or August – there’s enough honey to harvest. We take the boxes of honey frames and we put them into our garage and allow the bees to evacuate. Then, we scrape the comb off the frame which is about a foot-and-a-half feet long. Once the wax is scraped, it allows the honey to be accessible. Then, we stick it into an extractor and it spins and the force pulls the honey out. It drips down and goes into a spout at the bottom of the extractor and it drips into a pale. From there, it’s filtered and put in jars. It’s a pretty simple process.

Q: Tell me more about your family.
A: Jesse is a vice-principal and teacher at Carpenter High School in Meadow Lake. He’s also coached many different sports over the years. We have two girls and a boy – Niah is 13, Ayla is 11 and Quinn is seven. All three of them are in the French immersion program. I speak a little bit of French, but I’m certainly not fluent. My mother is fluent in French and that’s one of the reasons we wanted our kids to know French – to kind of keep the language in the family.