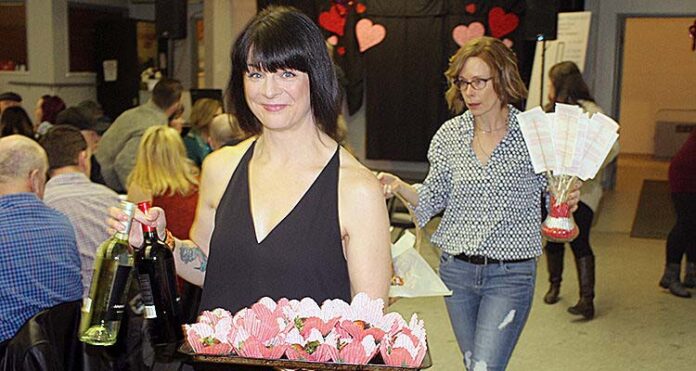 Close to $17,000 was raised for a new playground in Loon Lake Feb. 11 at a heavily supported steak supper fundraiser.

The event – hosted at the Loon Lake Recreation Centre – was a sellout as more than 170 people from the village and surrounding area came out to donate to the important cause. In addition to the meal, attendees also had the chance to participate in a silent auction and other draws. Playground fundraiser committee chairperson Ed Schafer said there’s been plenty of support.

“We’ve had tremendous assistance from various organizations and businesses in the community,” he stated. “The supper is an idea the group had collectively and we wanted to get the community together to raise funds, and show them what our plans are and create a little bit of hype.”

The new play structure costs nearly $80,000 and will be large enough for all elementary students at Ernie Studer School to utilize. The current playground is deemed unsafe.

“That was the trigger for us to get together and raise funds,” he said, noting the plan is to have the structure in place by Sept. 1.

The committee is also half way to its goal and Schafer anticipated $20,000 could be raised at the steak night. Prior to the supper, a Chase the Ace lottery was held, as well as a craft fair and various activities at school.

Ernie Studer principal Brad Freyman moved to Loon Lake 22 years ago and said the last upgrade to the playground was around that time. He stated an evaluation of the current structure found the cost of replacing versus repairing was cheaper in the long run. Overall, he added the fundraiser has created excitement in the community, especially amongst students.

“The kids at school are doing a reading fundraiser right now and we set a goal of $3,200,” Freyman continued. “It’s a four-week fundraiser and, in the first week, we had $2,500 come into the school.”

Freyman also said he was happy to see so many people attend the steak night, noting the feedback from people has been positive.