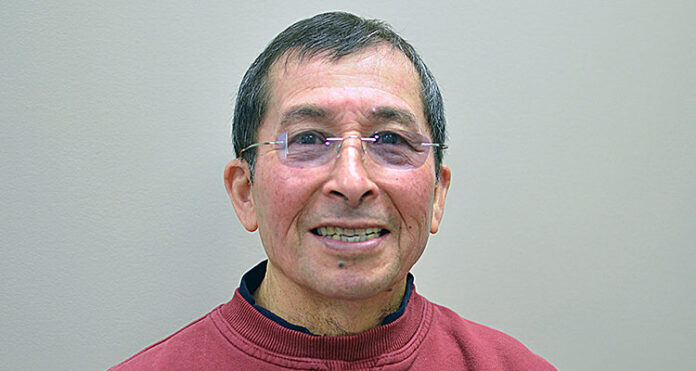 At 77 years of age, Meadow Lake resident John Michael doesn’t show any signs of slowing down any time soon. Recently, John spoke with Northern Pride about his career, life in the residential school system and the upcoming Montréal Canadiens Alumni hockey game.

Q: How is it you came to be a part of the upcoming Montréal Canadiens Alumni game?
A: I was asked by members of the organizing committee to join the team. I’ve been on the ice with some of the NHL old timers before. In 1985, I played against the Montréal old timers right here in Meadow Lake. I really enjoyed that game. I also played with a selection of NHL old timers, with Eddie Shack as referee, who came to town in 2002.

Q: What is it about the March 2 game you’re looking forward to?
A: It will be kind of a fun game. We’re certainly not going to beat them – they’re very smart and have a lot of skills. They’ll let us play with them, but if we get too close they will speed up and open up, mostly in the third period, and start scoring. We will still have a decent game. It’s mostly about friendship and it’s to help the nursing lodge here raise funds, so I’m happy about that.

Q: Tell me about your hockey background.
A: I started skating when I was four years old and still living at home. Later on, I was sent to the residential school – St. Michael’s – in Duck Lake. There, I participated in a minor hockey program and played Peewee, Bantam and Midget. From there I was transferred to another residential school in Lebret, SK – about 400 miles south. That’s where I really learned to play. In those four years – 1956-1960 – we won four provincial Junior ‘B’ championships.

Q: What happened after that?
A: When I was 19 I left residential school and went to university in Saskatoon. That’s when I received a phone call asking me to try out for the Junior ‘A’ Quakers. I made the team and played one year there. Because of my small size I wasn’t really going to go any further, though. I almost got killed a few times playing Junior ‘A’ hockey.

Q: But, you continued to play in some form or another, correct?
A: I never stopped playing. After I finished university, I was working for the public service commission provincially when I received a phone call to report to Green Lake. I didn’t know where Green Lake was, but began working there in municipal affairs as a district clerk. While I was there, I was asked to try out for the Meadow Lake Senior ‘A’ Stampeders. I attended training camp for a whole week and made the team. We had a very good season and won the championship – it was a great experience. The only problem I had was driving back and forth 30 miles, especially in the wintertime. That was tough.

Q: Did you remain in Green Lake long?
A: I was there for a couple years, but was later appointed by Aboriginal Affairs Canada to work as an audit officer. I continued to play hockey for the Stampeders. I played for them from 1964 to 1974 and when I turned 35 years old I began playing with the old timers. I haven’t quit since. Today, I still play recreational hockey on Friday mornings. I’m now 77 years old.

Q: What is it that keeps you going at your age?
A: Well, first of all, I enjoy hockey. I also want to stay in shape and be a role model or example for aboriginal young people who are involved with drugs and alcohol. I believe they should be involved in sports to keep themselves healthy and to keep themselves busy. This might just be my last year playing, though, because it’s hard on the body.

Q: Where are you from?
A: I’m from the Beardy’s and Okemasis First Nation. But, I only lived there until I was about five years old before being sent to residential school for 12 years, Saskatoon from there and then to this area. It was work that brought me here and my wife, Jeannette, is originally from here as well. I’ve never left. I love Meadow Lake. I go back home sometimes to visit my mother – she’s 96 now – but I don’t really know anyone else there anymore.

Q: Tell me more about what you did for a living.
A: As I said, I worked in Green Lake as a district clerk for the municipal affairs department of the provincial government. I came to Meadow Lake where I was appointed as the audit officer for Aboriginal Affairs Canada. Shortly after that I became superintendent of Canadian affairs and later district manager.

Q: You worked directly with First Nations bands as well, right?
A: Yes, after I left Aboriginal Affairs, I was contacted by Big Island Cree Nation where I served as executive director for two-and-a-half years. When I left there, I went to work for Waterhen Lake First Nation and, later, Flying Dust First Nation. In a way I was pleased to work for Flying Dust because I got tired of travelling. I still do some consulting work with the bands now.

Q: Was there much travel involved with your work?
A: Yes, in fact in 1980 I was involved in a tragic airplane crash. Six of us staff were travelling with Athabasca Airways and we crashed at Buffalo Narrows. One of my colleagues was killed in the crash and the rest of us survived, but it was a terrifying experience. I recall waking up in the Ile-a-la Crosse hospital with a concussion and a separated shoulder. We were in Buffalo Narrows for lunch and tried to take off three times before we crashed. We were planning to fly to Buffalo River for work, but it was storming and, bang, we went down.

Q: What else keeps you busy these days?
A: I’m a fourth-degree member of the Knights of Columbus. I’m busy with that group, helping out with the Catholic church, but particularly with raising funds to meet the needs of different people in need of help.

Q: Tell me about your family.
A: Jeannette and I were married in 1969. I played hockey with her brother and remember, when we were about to get married, I was wearing a cast and had to take it off before the wedding. I broke my leg playing with the Stampeders. Together we have two sons – our youngest, Derek, is a lawyer. He worked in Saskatoon but is now the legal counsel for the University of Alberta. Our oldest, Kevin, is the vice-president of a commercial bank in Saskatoon. They’re both married and have children of their own.

Q: You must be very proud to see them achieve so much success.
A: Yeah, we encouraged them a lot. Because of the hardships I went through growing up in residential schools, I especially wanted to see them do well.

Q: Do you believe your experiences in the residential school system made you stronger?
A: I learned what self-discipline is all about. I’m not afraid to say – the way we were kept in there – it was like being in a jail setting. I was actually involved in the discussions leading up to the Truth and Reconciliation Commission’s report. I was interviewed for many hours at a hearing, and I was cross-examined – it was tough. But, I told them exactly what happened. There was a lot of negative stuff, but I want to talk about the positive stuff. I gained my education, I learned how to live, and I learned self-discipline. To this day, I still have to arrive places on time. You’ve probably heard about this thing called Indian time where everyone and everything is always late. That is not for me. When I do something, I have to be there.

Q: What’s the best advice you’ve ever received?
A: Try to live well, look after yourself and look at the positive side of things. Also, believe in God as a Christian. I read the Bible every day. God has guided me all the way through.