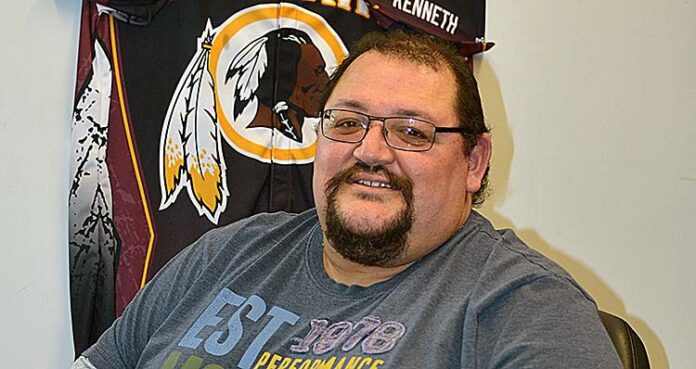 Currently on his eighth term as a Flying Dust First Nation councillor, Richard Derocher has a lot of responsibility on his plate. Recently, Richard spoke with Northern Pride about his role in the recent Montréal Canadiens Alumni game, his portfolios as councillor and about what makes the band special.

Q: Tell me about your role with the Montreal Canadiens game?
A: Initially, organizers of the game asked if I would assist in announcing the hockey game, but as the date got closer I was also asked to help the master of ceremonies, Brian Gislason. I jumped at the chance because it’s important to give back to the community. It was one of the largest games I’ve ever announced.

Q: I understand you also announce the Broncos games?
A: During those games I announce who scored the goals and who got the penalties and let everyone know about the team’s sponsors. I’ve been with the Broncos since their first puck drop in 2012 and I’m still involved.

Q: When did you start announcing hockey?
A: My son, Dustin, used to play in the Meadow Lake Minor Hockey program and I would announce their home games. Mayor Gary Vidal was one of the first coaches for my son and I announced for them in either Peewee or Bantam. As the years went on and my son finished hockey, I really missed the rink and Gary gave me a call and asked if I wanted to announce some games, and it took off from there.

Q: What do you do to prepare?
A: I do my homework and I get to know the players. Before the game, I try to practice the names for the ones I don’t know. For example, with the opposing teams, I’ll ask around to learn how to properly pronounce various names. I try get it right for them because everyone likes to hear their name right.

Q: Has hockey always been big in your life?
A: I played minor hockey in Meadow Lake and I’ve had a lot of good coaches. One coach I remember was Jim Herrod because he taught me right from when I was a little guy until about Bantam. When I went to school for Grades 10-12 at the Beauval Indian Residential School, I played hockey there and it’s always been a big interest of mine. I’m a Toronto Maple Leafs fan, so I’ve watched it for a long time.

Q: What keeps you involved?
A: The sport is so exciting and fast. It also gives me an opportunity to see kids grow. You get to see the kids mature in the minor hockey program, then move into the Broncos system. I announced the hockey games for the Vidal boys when they were in Bantam and Midget, and now I’m announcing them as Broncos. I don’t only get to watch these kids grow as hockey players, but as young men too.

Q: Has hockey always been big in Meadow Lake?
A: Meadow Lake is a real hockey town. The legendary Meadow Lake Stampeders were big in this town and hockey has always been huge. Also, a small town like us is able to push out National Hockey League players such as Blake Comeau, Jeff Friesen and the (Dwight and DJ) King boys. We put out a lot of good hockey players and that’s something to be proud of.

Q: How long have you been a Flying Dust councillor?
A: I’ve served seven terms off and on since 1994, so that’s 14 years. I’m currently in my eighth term now, which will last for four years. Since I was about 14 years old, I’ve always wanted to be involved with the band and help out somehow. In 1994, we had a young council which included the late Howard Gladue, Rico Mirasty, Wes Lambert, and Gerald Durocher as chief. I think we were all under 30 years old.

Q: When you think back, compared to now, what has changed?
A: Flying Dust has been progressively growing, growing and growing. Little projects we used to think were big projects, are just little projects now. For instance, we built our administration office in 2005, we’ve built the arena, as well as the Meadow Lake Tribal Council building. The projects and our economic developments are getting bigger. It’s been continuous growth and that’s probably the biggest difference. There’s more opportunity now.

Q: Has housing also expanded?
A: The budget hasn’t expanded, but this year we’re putting $700,000 of what we call own-source revenue into housing. We’re building seven houses in 2017. Housing is one of those things where we build a bunch, then don’t build for a while – but there’s always renovations. We have a housing stock of about 220 units to look after.

Q: What are some of your responsibilities as councillor?
A: When I started, I was involved with youth and recreation. That’s still dear to my heart. I’ve since moved on to health and education. Presently, my portfolios are economic development, membership and governance, as well as I’m sharing finance with chief Jeremy Norman.

Q: What will the band we busy with this spring?
A: We’re finishing the design for the addition to Kopahawakenum Elementary School – we’ll be moving from a Kindergarten to Grade 4 school to one that goes up to Grade 9. We will probably start construction in either June or July. We’re also looking at our economic development portfolio and structuring it differently. We want to start some opportunities for the band in some business areas.

Q: What are your thoughts about the potential new sport’s centre?
A: We’re community minded and we want to see the community grow. One of the areas we talked about quite a few years ago was exactly a facility like that. One side had soccer pitches and the other side was the arena. We had been talking with the RM and City of Meadow Lake. That didn’t work out, so Flying Dust went ahead and built the arena because there was a need. The soccer pitches fell by the wayside and I’m glad the Boreal Recreation Centre group is moving forward with it.

Q: Did you grow up in the area?
A: I was born and raised in Meadow Lake. I still have a lot of childhood friends in Meadow Lake who I see on a daily basis. It was a great town to grow up in. I always tell my wife, Joanne, if we win LottoMax, we’re not moving anywhere. Growing up, my father, Clarence Derocher, raised us to be outdoors all the time. We were always in the bush hunting and fishing and getting wood. I still enjoy being in the bush – it’s my sanity place. It’s a place for me to recharge.

Q: What was your experience at the Beauval Indian Residential School?
A: My experience was a lot different compared to what happened with the older people. When I went to residential school, the Meadow Lake Tribal Council was just taking it over and it wasn’t run by the Department of Indian Affairs. One thing I always say, where can you get three meals every day, new linen on the bed everyday, your laundry done every day, as well as as much sports and education you want? I wasn’t a good student in school, but when I went to Beauval, I had to study all day and that boosted my grades. Also, if you wanted to play sports, you had to retain a 70 per cent average, so it was the best place for me.

Q: Tell me about your family.
A: My wife, Joanne, is from the Poundmaker Cree Nation and we have three kids. My daughter, Vanessa, is a teacher on Little Pine First Nation. My other daughter, Whitney, lives in Meadow Lake and she just had a baby six months ago. Our son, Dustin, still lives with us at home.

Q: What makes Flying Dust special?
A: We’re a very proud community and proud of where we are and how we got here. I give the leadership of the last 30 years credit. We’ve been steady, have had good leadership and our elders have never let us go wrong. They made sure we’re steered in the right direction and we’re not going astray.