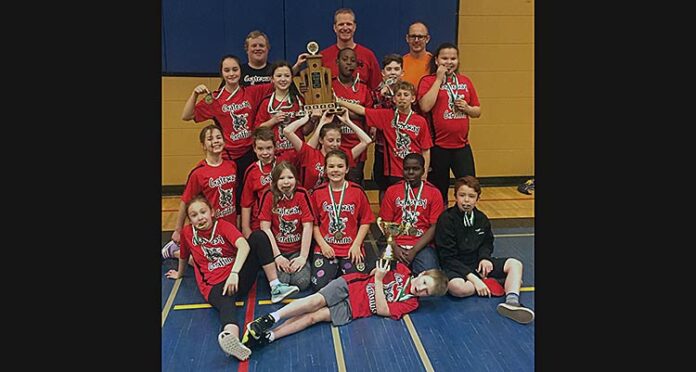 Earlier this month, for the fourth consecutive year, student athletes from the Meadow Lake school secured gold at the Table Tennis Saskatchewan Provincial School Championships. The event took place April 7 and 8 in Saskatoon and featured a number of schools from throughout the province.

“In total, there were 122 players who competed this year including 28 from Gateway,” explained Gateway principal and table tennis coach Greg Ackerman. “This was our fourth year in a row winning the elementary division, but the competition is getting a lot tougher. There were a few new clubs involved this year and we won by only about 10 points, which is closer than in past years.”

The tournament featured boys and girls singles, as well as boys and girls doubles. The overall winner was determined by combining points earned in each category for the respective schools to take part.

“We actually changed things up a bit this year in terms of our practice schedule,” Ackerman continued. “We held two weekend camps where players put in at least 10 hours each weekend. We also had the provincial coaches attend both weekends, and really saw some amazing skill development this year, great sportsmanship, and the kids really had fun. We have some really strong players and we’re really looking forward to next year.”

“Provincials is a great event to attend,” Pigott said. “Because table tennis is such a different sport, the kids don’t get a lot of exposure to it. So, when they attend provincials, they get to see some highly skilled players and they learn quite a bit as a team as well.”

Gateway has only been sending student athletes to the provincial tournament for the last four years with the exception of 2007 when it was still a one-day event. Table tennis itself, however, has been promoted at the school for the past 15 years.

“The provincial event was set up like a professional tournament – I’m sure when the kids walked in for the first time they were in awe,” Ackerman said. “We promote table tennis at Gateway because it’s not only a sport that can be played all year round, it’s also a lifelong sport that improves your agility, foot speed, hand-eye coordination, mental thinking and even brain development because you constantly have to be ready for the next point. All of these things can also prepare you for other sports.”

While only 28 students from Gateway attended provincials, table tennis is promoted throughout the school. Earlier this year both a Grade 5 and a Grade 6 tournament was held at Gateway, while a family table tennis night also attracted large numbers.
“About 120 Gateway children and their parents took part that night,” Ackerman said. “It was a lot of fun.”