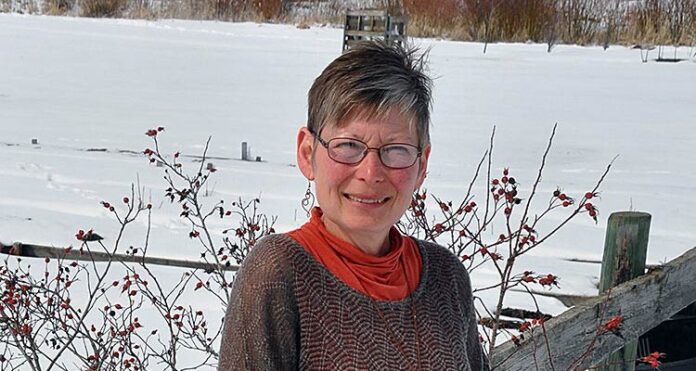 Having a green thumb most her life, Meadow Lake resident Pat Morley is the perfect fit when it comes to serving as coordinator of the Willow Creek Community Garden. Recently, Pat spoke with Northern Pride about the garden, her former career with SaskTel and her family.

Q: What is your role at the Willow Creek Community Garden?
A: For the last seven years, since we moved from North Battleford to Meadow Lake, I was just a participant in the garden. Last year, when we received our Community Initiatives Fund (CIF) grant, I was asked if I would be interested in becoming the garden coordinator. I jumped at that because there are so many opportunities the garden offers. So, for the past year, I have been the garden coordinator.

Q: What does that entail?
A: Pretty much everything that has to do with setting up, maintaining, ensuring the quality of the garden and the surrounding area is kept up to suitable standards. We were in a situation where the garden was becoming a little unkempt because we didn’t have enough volunteers to keep the area maintained well. We were also having a few problems as far as vandalism. Since I’ve taken on this position, what we feel is so great about it is there’s a presence there. We do have the gardeners who are there quite often, but not per se the presence of someone there in the daytime hours or being able to walk past and do a check on the garden daily. I’m in such a good place. I live about a half-block away, so it’s convenient because I can walk by and make sure everything is in good order, the shed is locked and the gate is closed.

Q: What is the community garden all about?
A: It’s an allotment-style community garden where everybody who wants their own plot gets their own plot depending on what size they want. But, because it’s also a community garden, we have plots we work together on. We share that. We have fruit trees that are communal, we have perennial herbs, rhubarb and strawberry plants. And, if there’s any plots where something’s happened and somebody can’t keep up, we’ve taken them over, everyone works on them and we share the produce from them. Everyone who is out there helping and volunteering all have access to these plots.

Q: So everyone shares what’s grown?
A: Yes, but when we have an abundance of produce, which is really great, there are people who benefit from it. The Door of Hope, for example, with their food kitchen and stuff like that. Several donations of extra produce have been made to them, and we contribute to schools and such. I’ve done several tours with the young children the last couple of years. A lot of these kids don’t realize where some of the food they eat comes from or how it’s grown, so it’s an educational process.

Q: How much work goes into ensuring a bountiful harvest at the end of the season?
A: I love gardening, but it’s not for the faint of heart. If you think you’re just going to throw some seeds in the ground and go reap your benefits, it’s not going to happen that way. If you put in a little bit of work, it will pay off. We don’t use pesticides at the garden – we promote organic growth – so you know where the food is coming from, and everyone can use a little fresh air and exercise, which the garden also provides to those who use it.

Q: Did you have a knack for gardening before coming to Meadow Lake?
A: You have to understand I am from a rural background. If you didn’t grow it, you really didn’t have it. I was very blessed with having a mother and father who were very agriculture oriented and my mom in particular basically grew and made everything. I was lucky to have someone who could really teach me this stuff and I’ve gardened all my life. Even when I moved to Saskatoon as a young woman and went to school, I had access to somebody’s backyard if I wanted to put in a few vegetables. It was great I could do that. When we got married and had a family, it was just more beneficial because you had all this wonderful, fresh produce.

Q: I’m assuming you’re an advocate of living a healthy lifestyle in general?
A: Definitely. If you look at the younger generation, they’re so computer and gadget oriented. They’re more interested in videos and such. I’m not saying this is the case for all children because there are some who still enjoy being outside, but we as parents and mentors need to show and teach our children how they can benefit from growing their own vegetables and by just being outdoors and experiencing the outdoors. There’s going to be a time in their lives when they say, “Gee, I wish I learned how to do that.” So, if you start them young and teach them a few basics, great. The good thing is a lot of the schools have garden programs now. I’ve seen a great improvement at the school level the last few years as far as what they’re doing in terms of introducing gardening to students. We’re also trying to set up a volunteer mentorship program where young people can come out and get some hands on experience.

Q: How many people are involved with the garden?
A: We have 32 full-sized plots, four large, raised beds and, this fall, I made two really tall beds for people who can’t really bend over. It’s good for people with mobility issues, so the focus now is to also get more elderly people out there. I’ve already talked with a lady who would like to volunteer as a senior coordinator to bring some of the seniors from Golden West Manor and such out to the garden, to experience it and to share their wisdom. They don’t have anything like this where they live.

Q: What brought you to Meadow Lake?
A: Work mostly. My husband, Ken, works for SaskTel and I did too prior to moving here. We just decided at that time Meadow Lake is such a nice, quiet location, it’s close to the lakes, and it would be a nice step toward eventual retirement.

Q: What did you do when you worked for SaskTel?
A: I was a customer service representative at the SaskTel store in North Battleford for both business and residential service. But, if you can believe it, my educational background is in biological sciences. I have a diploma for biological sciences, so if you look at what I was trained to do and my history, I’m actually doing more now after working 20-plus years for SaskTel.

Q: Tell me about your family.
A: Ken has been with SaskTel for 39 years. He’s considering looking at retiring soon, but he works as a fibre cableman. We actually moved to Meadow Lake because he was on the road out here more than in North Battleford. We actually looked at moving here a few times because of his job being in the northern area so much, but the kids were still in school so we decided to stay put and let them finish school. We have two daughters. Robin and her husband, along with their twins, actually live in Meadow Lake now too. She’s an RN and he’s with the RCMP. Our youngest daughter, Dawn, lives on Vancouver Island. She’s married and has a beautiful little boy. What’s great about my role with the garden is it gives me the freedom to be able to spend time with my grandchildren.

Q: Will people be able to get planting soon?
A: I’m praying. A couple weeks ago we were in our shorts and I was raking up the front yard, now the garden is under water and there’s snow on the ground once again. We’ll just have to pray it melts fast and drains away.