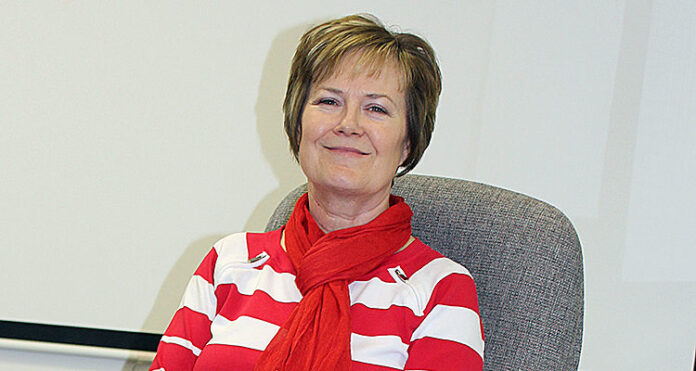 With National Volunteer Week being celebrated throughout Canada April 23-29, Meadow Lake’s Tammy Hubbard knows the importance of lending a hand in her community. Recently, Tammy spoke with Northern Pride about her role with the Northwest Trade Fair, her career and family.

Q: I understand you’re involved with the Northwest Trade Fair.
A: Yes, we almost have 60 booths signed up, so we’re happy about that. It’s the biggest fundraiser of the year for the curling club. The expenses at the rink are pretty high, so the money raised really helps. The power bills alone are really high. I couldn’t say how much the fair raises, but it covers a good chunk of the expenses. I’ve been involved with the trade fair committee for about five years, but the event has been going for the past 26 years. This year, it is again held for three days from April 28-30. It’s always held around this time of year – this year it’s about a week later than normal.

Q: When does your group begin planning for it?
A: We start before Christmas by sending out letters to past exhibitors. We don’t have a big committee. There’s Shannon Heddon, Lee Brown, Owen Mutch, Roberta Patterson, Donna Winkler, Shelly Kuffert and myself. There’s a core group of us. Lee, Shannon and Shelly have been involved for quite a few years. My role is arranging the advertising, but because we’re such a small group, we help one another.

Q: What would you say is special about the trade fair?
A: We’ve had local entertainment for about eight years and we find it brings more people in. We’ll have kids involved with gymnastics and dance. Marty Bishop will be there. The trade fair is kind of a social event too. After a long winter, people like to come out to shop and it’s just something to do. We’re hoping for a good turn out. Last year, we had 1,500 people attend over the three days and I’d say it was successful. Attendance at the fair is always weather related. If it’s nice outside, people will want to be out in their yards, whereas if it’s rainy and cool, more people will likely come.

Q: What was this past curling season like?
A: I curl Monday nights with the ladies, but curling also happens on Wednesdays and Thursdays. The club has a good junior program, so we keep trying to get young people involved with that. The season is over now, but we usually start in October and go right until the end of March. To also raise money, we host Christmas parties and individuals or businesses can rent the space. We also hold a toy bingo and sell tickets for various trips.

Q: How long have you been curling?
A: I’ve been curling for a long time. My husband, Kevin and I moved to Meadow Lake in 1984 and I’ve curled here since then. There were a few years I missed, but when we lived in Unity, I curled there too. This season our team won some and lost some. I don’t even keep track of the scores because it’s just a great way to get out in the winter. I curl with a fun group of ladies and it’s enjoyable. I like the social part of it. It gives me something to do. I don’t have any kids at home anymore, so I just enjoy getting out of the house in the evening. If I wasn’t involved in curling, I’d probably stay home all winter long.

Q: Do you volunteer with any other groups?
A: I really do enjoy the different volunteer roles I do in the community. Kevin and I are also both members of the Lions Club and we help out with the chuckwagon races. We enjoy working with the Lions Club because all the money stays in the community and goes to different projects. Kevin and I have been involved in the club for a long time. I’ve been a member in Meadow Lake for 13 years.

Q: What do you do for work?
A: I’m the loan officer with Beaver River Community Futures Development Corporation. We help small businesses within our region. There are 13 community futures regions in Saskatchewan and our region is the Northwest part of the province. It’s spans from Meadow Lake north to Pinehouse. There’s another community futures serving the northeast side of the province (Visions North). In our region, there are 46 communities we help.

Q: How busy is your office?
A: Very busy. We probably do between $2 million and $3 million worth of lending in a year. We’re a very active community futures. We’re not considered a bank, but a non-profit organization and we’re funded by the federal government through Western Economic Diversification Canada. We do a lot of loans, but if someone is thinking of starting a business, we can direct them where to find information.

Q: How long have you been with the organization?
A: It will be 13 years at the beginning of May. The organization, however, has been around for more than 28 years. I started as a loans officer, but before I took this job, I worked at a credit union. We’re proud of what we do. Since we’ve been doing what we’ve been doing, we’ve lent more than $55 million. It’s a great program because sometimes new businesses can’t get any funding in the traditional way because they’re not yet established. But, we still require it to be a viable business with adequate security.

Q: Are you originally from here?
A: No, I was born in Medicine Hat, AB, but my hometown is Hearne, SK which is south of Moose Jaw. Kevin is also from southern Saskatchewan. He’s from Avonlea. We moved here together in 1984 and we really love the community. Kevin is retired now, but he most recently worked for RobWel Constructors here in Meadow Lake. I have a brother who still farms near Hearne and my dad helps him now with seeding and harvest.

Q: What did you do in terms of work or a career after high school?
A: I didn’t really have a plan, but I worked for a bank for a few years and I’ve had other jobs. I don’t have any post-secondary education, but I do have a lot of life experience with a banking background.

Q: Tell me about your family.
A: Kevin and I have five sons and one daughter. They’re all grown up and out of the house. Our oldest is Bobby, then there’s Brian, Julie, Sean, Brett and Michael. We were involved in a lot of hockey throughout the years. Our kids have always been active and Kevin was a baseball coach and umpire. Sean lives in Meadow Lake and everyone else is in the Saskatoon area except for Julie who lives in Regina.

Q: What was it like raising your family here in Meadow Lake?
A: It was great. They went to good schools and they had access to a lot of sports programs. All my kids were in hockey for a period of time and Julie was in ringette. It was definitely busy, but there’s quite an age range between the kids. Bobby is older than 40 and our youngest is going to be 25 soon. That’s why I need to curl now because things are quite a bit slower than they used to be. Although, even when the kids were at home, we always used to curl.

Q: Do you ever have a chance to do much travelling?
A: We have been to Mexico and we were just there at the end of November. Our son will be getting married in Cancun in January, so we’ll be going back. Mexico is one of our favourite places, but I also like Palm Springs too – mostly because we love the golfing there. We really enjoy the hot weather. I’m still working so we can’t go away for six months, so we like to go somewhere warm. We’re not fans of the cold weather.