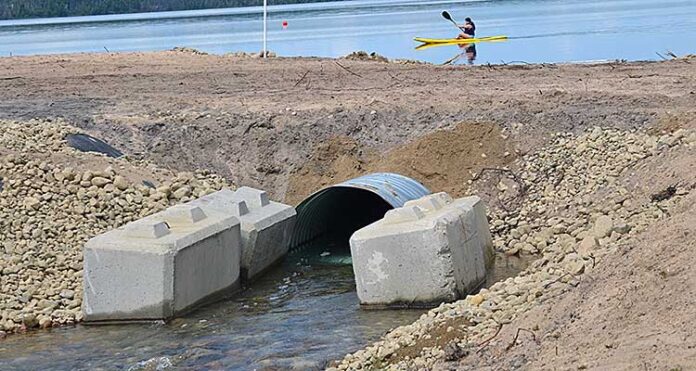 Through cooperation with the Water Security Agency, the Jeannette Lake Cottage Association recently put a stop to the issue of rising water at the lake – a problem that persisted for several years, washing out the beach-front and, in some cases, causing homes to be flooded.

“We’ve built about 1.2 kilometres of trench from the lake going out to the old Waterhen Road,” explained cottage association president Randy Songer. “Brander Bros. were the contractors hired to do the work, which includes a culvert just off the lake complete with a fish screen so it doesn’t cause any harm to the fish or their natural habitat. So far, everything is going as planned according to the Water Security Agency. It’s been a week since we opened up the water and the lake has already gone down four inches.”

Songer said the ultimate goal is to lower the water level at Jeannette by one metre.

“As the water is diverted from the lake and to the old Waterhen Road, it ends up in Flotten Creek then Waterhen Lake and eventually the Churchill River,” Songer continued. “And, the good news is this is a permanent solution thanks to the combined efforts of our association, the Water Security Agency an the Department of Fisheries and Oceans. There will no longer be a problem with too much water in Jeannette Lake.”

Earlier this year, the water at Jeannette rose as high as 487.2 metres, which Patrick Boyle of the Water Security Agency said at the time was at least a metre higher than normal.

“Based on what we’ve seen reported, the level of the lake has been steadily rising for the past decade as a result of both surface and ground water,” Boyle noted in a previous interview. “Rainfall and area runoff accumulate on top of the lake, while the water table under the ground has slowly been pushing the lake up for the last several years.”

Heavy rainfall earlier this spring also contributed to the problem this year. Songer, meanwhile, said Jeannette is underground-fed only and, until now, excess water just hasn’t had anywhere to go.

As for the cost of the recent project, Songer would not divulge the information, as the association is waiting to see if it can secure funding from the provincial government. Cottage owner Merv Johnson, however, said cottage and camp owners were told they might have to pay $3,000 each. This, he added, could change, though, once final expenses are tabulated.

“We’re hoping the province will pitch in,” Songer said. “In the meantime, I’m very happy with how the project turned out.”