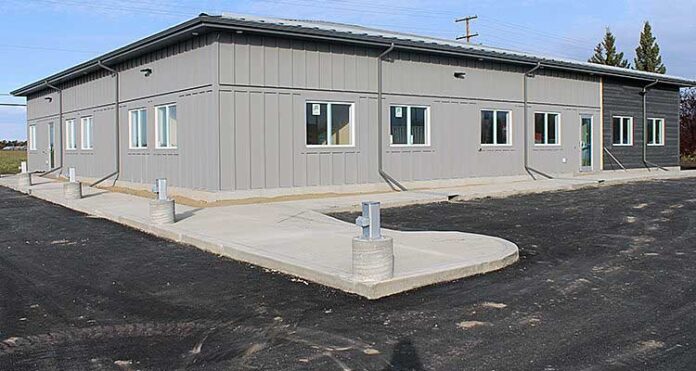 The RM of Meadow Lake is on the move.

Officials with the rural municipality expect to be in their newly built office – located along the west service road – by Nov. 6, although contractors will hand over keys to the new building as early as next week.

“The computer company is coming Nov. 2 and they’re going to set the computers up,” RM administrator Gina Bernier commented. “Laurie (Lehoux, financial officer) and I have moved a bunch of papers into the safe room there already. The desks will be all set up for us when we get there.”

Reeve Tim McKay estimates the new building to be at least five times bigger with much more space.

“With all the extra responsibilities the provincial government has the RMs doing now, we need at least one extra person and the office is too small,” he said, noting the old facility – located on Centre Street – was constructed in 1961. “It was time after that many years. It was either a major renovation or a new building. For our purposes, I don’t know if a renovation would have given the space that was going to be needed.”

Listed for sale last week for $250,000, the approximately 3,800-square-foot building in the down-town core is currently occupied by RM administrative staff on the street level and CJNS Radio upstairs. But, reiterating the RM’s expanding workforce with a heavier workload, McKay said it was time to put the building up for sale.

“We’re not going to sell it at a fire sale price,” he stated. “We hope it’s sold as soon as someone wants to pay for it, but we might have to wait a little while.”

McKay went on to say CJNS will be allowed to operate upstairs even after administrative staff move out. He also said, if a buyer isn’t found soon, the street level section could also be rented out.

Meanwhile, a date for a public open house at the new location will also be announced after the RM staff is settled in.

The final price of the new office will be known at the end of the month, and it will exceed $1 million.