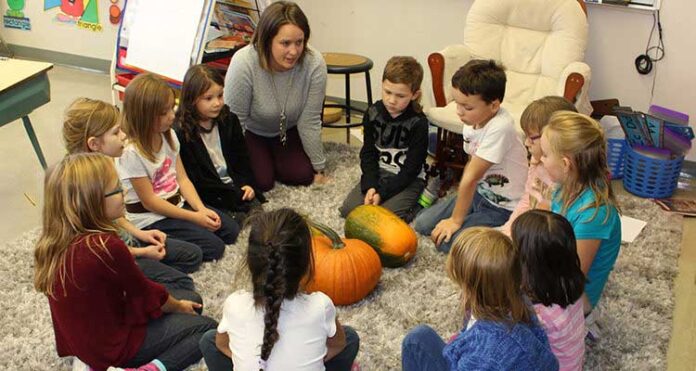 It’s hard for students to fall through the cracks at Rapid View’s Green Acre School.

That’s according to principal Al Maier who has been at the Kindergarten to Grade 8 school for close to 14 years. He said, because there are only 41 students enrolled – which makes it the Northwest School Division’s second least populated facility – it’s easier for staff to monitor students to achieve the best outcome.

“Our students do super well academically when they go to town (Meadow Lake),” Maier remarked. “The kids get a lot of one-on-one time with the teachers and they have small class sizes.”

There’s a bit of a twist among staff and students, however, as each of the eight employees has at least one child registered at the the school. That means 25 per cent of the student body consists of parents who not only drive them to school, but stay with them throughout the day.

“You can’t wish for it better going to work every day with your kids,” Maier continued, adding his daughter, Breanne, is in Grade 8. “You know exactly how they’re doing and you get to see them on and off throughout the day. Other parents get to see the pictures – I get to be right there with the kids. That’s been a real plus with this job for me.”

Maier went on to say the small size of the school hasn’t been a limitation to learning in any way. Although there is no gymnasium or kitchen attached to the building, staff and students access those amenities at the Rapid View Hall right next door.

“It’s a small school and you get to know every one personally,” he said. “We just know each other so well, by the time a student has been here a couple years, we know how they learn and their likes and dislikes.”

Employed as the wellness coordinator and public health nurse at Green Acre, Lynda Letkeman’s job is mostly to look after the well-being of students. Her children, Freja and Gabriela, are both enrolled in the school and she described the close-knit atmosphere akin to family.

“The students are like siblings here,” Letkeman commented. “They have their little spats, but have to learn how to work it out because that’s who they have to play with.”

Letkeman also noted the students tend to do well in sports and attributes a sense of growing up together as a reason why. She said, classroom grades need to be mixed so there’s enough players to make a team, meaning some students compete against others two years older than them.

“They do well at the tournaments and are always bringing home medals and trophies,” Letkeman added.