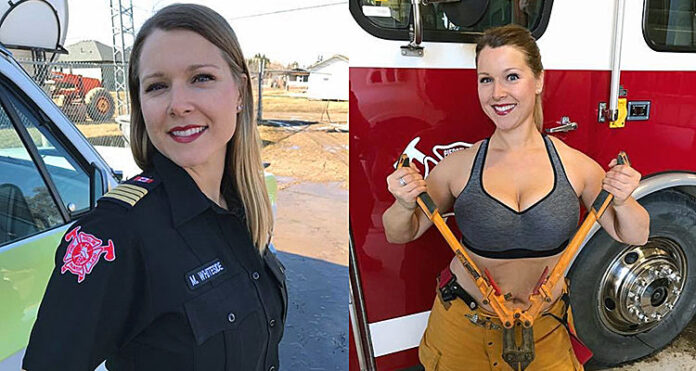 Fires aren’t the only hot stuff in Pierceland these days.

In addition to recent fundraising efforts by firefighters in Goodsoil, another blaze battler from the Northwest will also be featured in a charitable calendar in 2018. Meagan Whiteside of the Pierceland Volunteer Fire Department was successful in her effort to be featured in the coming year’s Saskatchewan Firefighters calendar.

“I’m Miss September,” Whiteside said in a recent interview. “The reason I chose to take part, however, is because I have a 10-year-old daughter and I want to show her that – in a male-dominated field – women can still be a part of things if they simply follow their dream. We have the ability to still be trail blazers and do whatever we want to in life if we put our minds to it and make that effort. I also want to encourage and inspire other women because it would be great to see more women become firefighters.”

Currently on sale, the calendar includes photos of firefighters from throughout the province. Money raised through the purchase of a calendar will go toward the Jim Pattison Children’s Hospital Foundation. The hospital is currently under construction in Saskatoon and – once completed – will serve as a provincial referral centre for moms-to-be, families and the more than 200,000 children living in Saskatchewan.

“Saskatchewan is one of the last provinces not to have a dedicated children’s hospital, but it’s very important we do have one because at some point everyone will have a child or know someone with a child who needs specialized hospital care,” Whiteside said. “I can’t think of a better cause to get behind.”

Whiteside has been a firefighter for five years. She began her career in Canwood before coming to Pierceland three years ago.