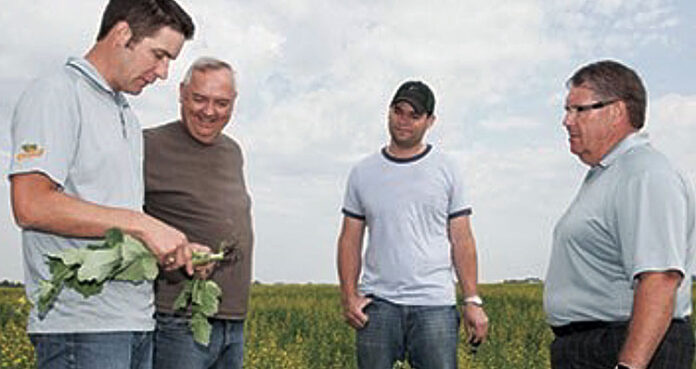 In farming families, dedication to the land is passed through generations like a treasured heirloom. That’s certainly the case for Keith Ranger and his son, Jason. Keith inherited his love of farming from his parents, who farmed just five miles west of Keith’s present farm in Leask, Saskatchewan.

“I bought my first land when I was 17,” says Keith, “I couldn’t get a loan from FCC because I was too young, so dad had to take the loan for six months. Then they transferred the loan to me.”

In the Ranger family, it’s become something of a tradition to start early in life. Keith, his father, and Jason all began farming as teenagers. It’s a great partnership: Jason is earlier in his farming career and open to trying new things, while Keith has the benefit of experience and knows how to build a strong foundation for success.

“Take a course on trading commodities, and get your marketing skills up to snuff,” Keith advises young farmers, “because anybody can put seed and fertilizer in the ground and herbicides on the plants, but if your marketing skills aren’t where they need to be you’re going to leave a lot of money on the table.”

In return for the lifetime of wisdom and work ethic passed down to him, Jason is introducing his Dad to new products and techniques that make the most of their acres. Working with DEKALB® Territory Account Manager, Roger McComas, the pair have seen exciting results growing DEKALB® canola.

“We’ve always been spraying some fungicide when we’re doing our first or second application of herbicide, just to give it a little boost, but the 74-44 BLwe didn’t,” says Jason, noting how well the hybrid has held up to blackleg.

Keith has switched to 75-65 RR. He has had great results with the hybrid’s strong pod integrity, minimizing shatter loss at harvest. Though they’re a family of swathing purists for now, they’ve seen for themselves how the DEKALB® 75-65 RR would be a great option for canola growers who plan to straight cut.

Choosing to seed so much of his acres with a new hybrid isn’t a decision Keith made lightly, but with a great DEKALB® Sales Representative’s advice in his back pocket, Keith has confidence that what he’s putting in the ground will pay dividends later.

“It’s about trying to get good fertility right off the bat and really pushing the macro-nutrients and weed/disease control,” Keith explains. The vivid yellow fields behind them are Keith’s 40th crop.

Whether they’re trying new hybrids, or testing out new disease management products, the father and son are always building on what they’ve learned.

When the time comes to harvest this year’s bounty, bystanders might overhear the pair’s favourite pump-up tunes echoing behind the combine, a sign of the good times both in the field and in the cab. It goes to show that, while there’s a lot of equipment involved in a big harvest, the most important tools on this farm are great attitudes and solid teamwork.

We thank Keith for choosing DEKALB® brand seed for his farm and wish them a safe and successful harvest this year and for many generations to come. Check out the results of farmer-managed DEKALB Market Development trials on DEKALB.ca this fall.