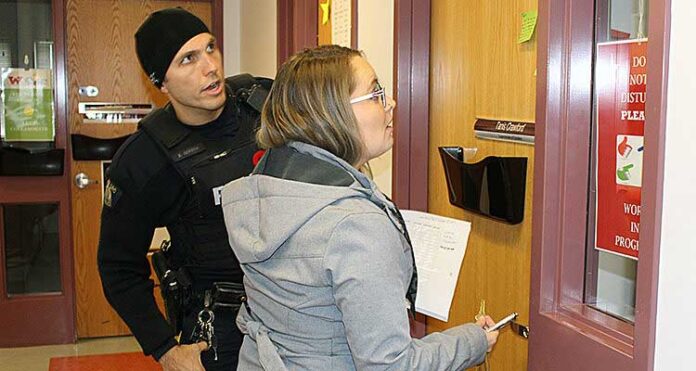 It’s best to be prepared for any situation.

That was the message behind a fake active shooter scenario that occurred on Halloween (Oct. 31) at the Meadow Lake Tribal Council and Flying Dust First Nation offices. It was performed in conjunction with the Meadow Lake RCMP, who sent an officer (Cst. Andrew Giassa) to roam the halls of the two buildings to look for anyone not following the imminent danger procedures in place.

Organized by the MLTC Occupational Health and Safety Committee, an internal practice drill was done about two weeks ago to prepare staff, but this was the first that involved police. Committee member Roberta Morin said employees were asked to lock their office door, turn off the lights, shut the blinds and hide under their desks.

“Overall, it went well,” she stated, noting there were six (mock) casualties. “We created the procedure as an OHS committee, but then we invited the RCMP to come in and review it. They made a few changes and mentioned they can come and do a lockdown drill with us.”

The committee has been working to create emergency situation procedures for the last 18 months and they have other plans in place in case of a fire, bomb threat, tornado and/or gas leak. Morin said such plans are important because it’s good to know what everyone is doing or where they are if an incident occurs.

According to Cst. Giassa, there was only one unlocked door during the drill and he noted everyone had good spots to hide. He said, had there been a real active shooter, the actions of the staff would have made it difficult to locate them.
Giassa noted, the drill was all about minimizing the threat to reduce the potential harm to employees.

“If there was an active shooter going in and they gained access into a room, it would make it that much more challenging because they’d have to go in and look behind every nook and cranny,” he commented. “That’s exactly what we want because, if we have an active shooter, they’re going to be drawn to somewhere they are going to see people, hear noises or see light. They don’t want to go to the dark closet or room where there might not be anyone there.”

Giassa went on to say there could be an active shooter at any location and, while there’s never going to be a perfect situation to practice for, it’s still important to be prepared.

“It’s really important to practice nowadays because unfortunately it’s a modern day reality versus back in the day when it was just fire and earthquake drills,” he stated.