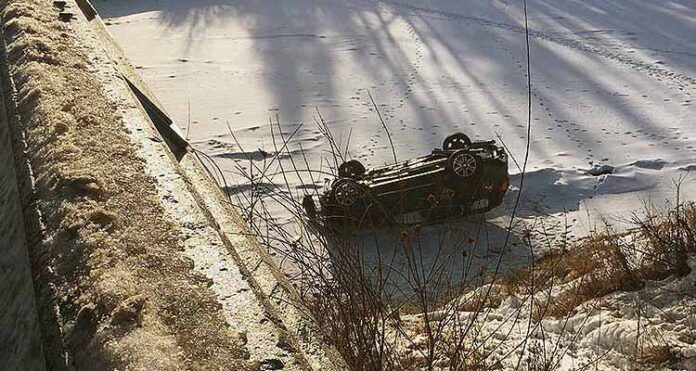 No changes are expected to the Beaver River bridge after two traffic incidents about 50 kilometres west of Meadow Lake.

That’s according to Ministry of Highways and Infrastructure senior communications consultant Stephen Shahean who said it appears a semi transporting a house Dec. 13 was too low to make it across the bridge. It became stuck on the guard rails at about 3 p.m. where it stayed for four hours until hydraulic jacks were used to lift the house to a higher position.

“Bridge crews went out and inspected, and there was no major damage to the bridge,” he explained. “The RCMP can lay charges, but they have not in this case. Commercial vehicle enforcement may conduct their own investigation and a fine could be a result. They do have up to six months to investigate and potentially fine a company in these types of circumstances.”

Shahean said the building movers, A T Holdings of Alberta, did have the necessary permit which includes the required width, weight and overhang. When permits are issued, the ministry reviews the dimensions and helps provide the best route.

Meanwhile, on Dec. 11, a vehicle crossing the bridge slid through the guard rail and flipped on to the ice below. The crash occurred around noon, but the driver and two child passengers were not seriously injured.

“Because of some of the milder weather and precipitation, some of the highways in the area had some icy and slippery sections,” he commented. “Bridges can sometimes become more icy with different temperatures and air flow above and below the bridge. That could have made it slick, but there’s no immediate plan to add any additional lighting or safety improvements.”

Pierceland RCMP Cst. Drew Smith also noted conditions were icy at the time. He said there will be no charges laid, adding it’s lucky there were no serious injuries.

“It was a really icy road and drivers could not tell the difference between ice on the bridge and the road,” Smith stated.